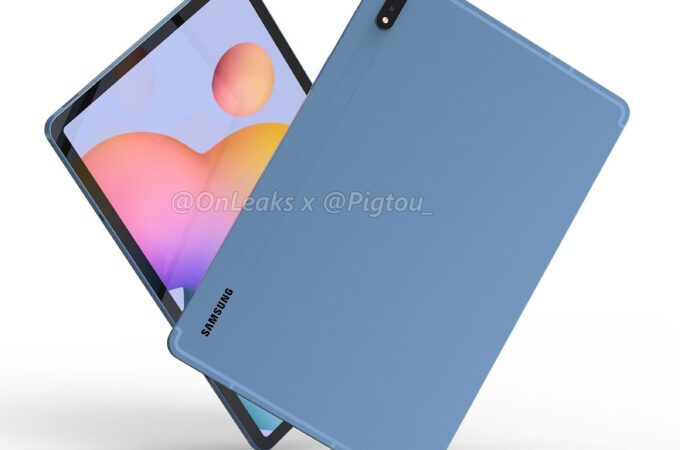 We’ve covered consoles and now we’re covering tablets, straying further from the name Concept Phones. It’s a pretty dry period, as far as concepts are concerned… Now as far as this set of renders goes, the Samsung Galaxy Tab S7 and Tab S7+ have been leaking quite a bit lately. Now @OnLeaks and Pigtou have created images based on the info they have on the slates.

Turns out that Samsung will launch them in July, with a new watch and headphones. The source expects the Galaxy Tab S7 to be around 253.7 mm long, 165.3 mm wide and 6.3 mm thick. It should make the device slightly larger than the 2020 11 inch iPad Pro, but also beefier than the Apple flagship slate. The Tab S7 gets even thicker if you also count the back camera, a dual one with LED flash. No love for LiDAR in Samsung’s world it seems.

The glossy back threw me off and I thought that it was made of glass, but it may actually be an unibody metal shell we’re getting here. That’s because we see plastic WiFi antenna lines cut at the back in the metal, which wouldn’t be seen on glass. Bezels are pretty narrow, as narrow as they can get nowadays and we see no cutouts or notches, as the selfie camera is tucked away in one of the borders. Last I heard the Tab S7 had an 11 inch screen and the Tab S7+ a 12.4 inch display.

About Kelvin
Passionate about design, especially smartphones, gadgets and tablets. Blogging on this site since 2008 and discovering prototypes and trends before bigshot companies sometimes
Nokia 7610 5G Gets the 2020 Treatment, With 5 Crazy Cameras   Sony’s PlayStation 5 Rendered Ahead of Today’s Big Presentation (Video)