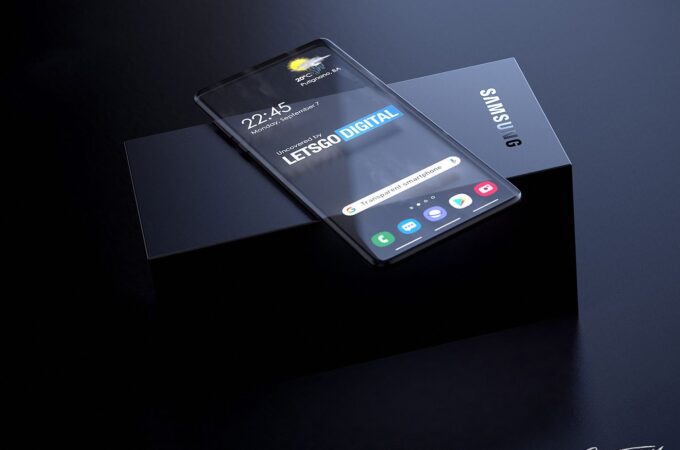 A while ago transparent phones used to be the cool thing to aspire towards. Even Sony Ericsson tried it out with the Pureness model and partially the Xperia S, which had a transparent area at the bottom. Ever since then there haven’t been any other pioneers in this field. Now Samsung appears to be ready to take on the challenge, with a fully transparent phone.

Letsgodigital has come across a patent of the sort and has turned it into a set of renders for us all to see. It’s a joint initiative between the Dutch website and designer Giuseppe Spinelli, aka Snoreyn. Back in January 2020 Samsung filed a utility patent with the USPTO (United States Patent and Trademark Office) and WIPO (World Intellectual Property Office). The patent was published on August 27th 2020 and describes the technology required to create a transparent smartphone.

It could also apply to other products, like a TV, monitor, laptop, game console or camera. It’s based on an OLED screen, with low power usage, high brightness and apparently a faster response time compared to conventional LCDs. It has a transparent luminous display panel through which you can see what’s behind the handset. Content can be displayed on the transparent screen, while it’s also see though. There’s no trickery here, or cameras capturing what’s behind it, but rather REAL transparency.

The patent mentions both alternatives: a flt screen and also a flexible screen with can bend, fold or roll. Just so you know, the designer behind this concept has quite the CV, having created a Galaxy Z Flip and PlayStation 5 concept, that both went rival. What surprises me is how slim this smartphone is and it makes me wonder where all the components are stored. A real transparent phone would need a sort of “hub”, to store components, like a bulge at the top, bottom or side, sacrificing a bit of the aesthetics.

I expect to see a concept phone of the sort, maybe a prototype, but definitely not a real machine.