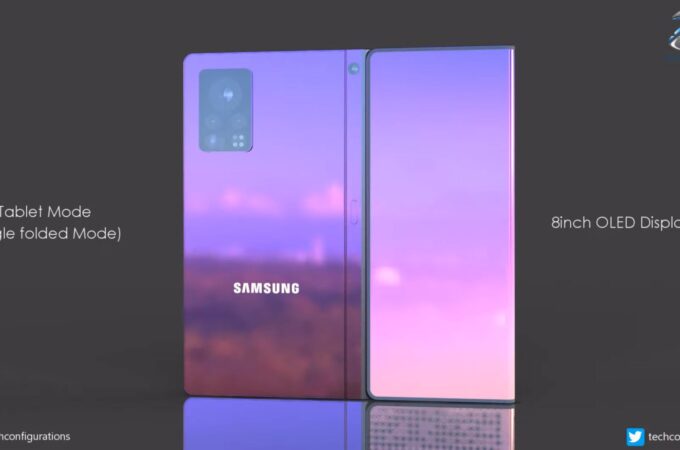 The Samsung Galaxy Z Fold 4 Tri Fold Concept packs a 10 inch main screen, which can be achieved with a tri fold setup. When folded, there’s a 6.6 inch AMOLED screen available. Apparently this concept is based on patent documents. At the back we have a strong camera setup, but also a familiar one: 108 megapixel + 64 MP telephoto camera + 16 MP ultrawide camera + another 12 MP shooter, maybe a second telephoto cam.

The device is hugely glossy, as shown here and when turned into a tablet it has an 8 inch OLED panel. In mega screen mode it gets a 10 inch OLED panel and at the back we see a dual hinge. One would think of the widespread leaks and concepts lately, which have one hinge and one rollable area. The frame/sides are angular and the colors shown here are blue, pink, green and other funky colors.

We’re approaching a time when the line between tablet and smartphone will be blurred. And I don’t mean iPad Mini, but rather a full fledged 10 inch slate. I feel that this Galaxy Z Fold 4 bridges that gap and it’s quite the jump from the previous Samsung foldables. A rollable would work better though…

About Kelvin
Passionate about design, especially smartphones, gadgets and tablets. Blogging on this site since 2008 and discovering prototypes and trends before bigshot companies sometimes
Samsung Triple Folding Prototype May Preface Galaxy Z Fold Tab/ Z Fold 4   Samsung Galaxy A32: What it Can do