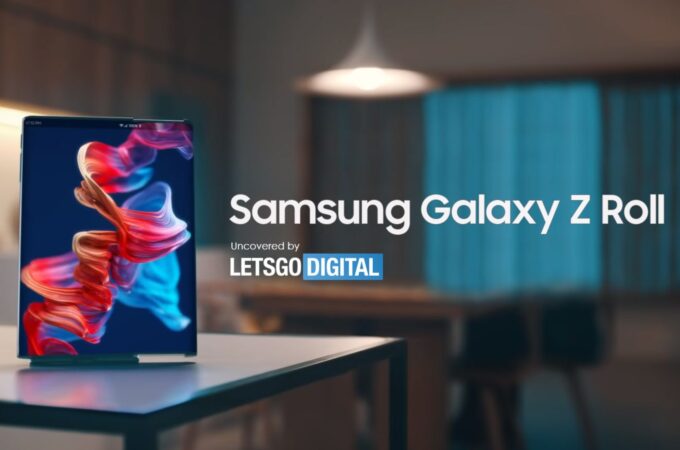 There’s been a lot of talk about Samsung’s future rollable phones, especially with the SID 2021 event going on these days. That’s because Samsung Display unveiled a series of new display paradigms, including a dual folding device, a rollable unit and a tablet that becomes a laptop. After the presentation we also learned the official name of the first Samsung rollable phone: Samsung Galaxy Z Roll.

The Samsung Display Wee 2021 conference included a showcasing from Samsung Display for the S Foldable, a slidable and a Rollable device. Afterwards, Letsgodigital uncovered the commercial name of the product, since Samsung applied for it in the European Union. It’s Samsung Galaxy Z Roll, which is described as a smartphone which can be used with an S-Pen. Judging by the name, the device is likely to have a roll-up display, while the “Z” refers to the series, since a Galaxy Z series that includes a set of folding screens.

The application shows that Samsung will include all rollable phones within the same series. This name isn’t exactly a surprise, since there was a theory about a Z Roll as the name for the Samsung rollable smartphone back in November 2020. Right now Oppo X 2021 is the only rollable phone on the “market”, even though it’s just a prototype/concept, which has yet to see the light of day.

According to the images released by Samsung Display, we’ll get a regular sized smartphone in the compact form, while the enlarged expanded model becomes 30% bigger thanks to the screen portion pulled towards the right side.

We have some renders from Letsgodigital, but also some straight from the SID 2021 event. The dual folding device looks the best, since it becomes so compact, even though it has two hinges. The folding tablet feels more like Surface Neo and doesn’t quite get me. The laptop is kind of interesting, but the under display camera is not enough of a selling point.

About Kelvin
Passionate about design, especially smartphones, gadgets and tablets. Blogging on this site since 2008 and discovering prototypes and trends before bigshot companies sometimes
Google Pixel 6 Pro Rendered by Waqar Khan, With Detailed Video Included   Samsung Galaxy S22 Ultra Gets New Camera Design, Secondary Screen At the Back