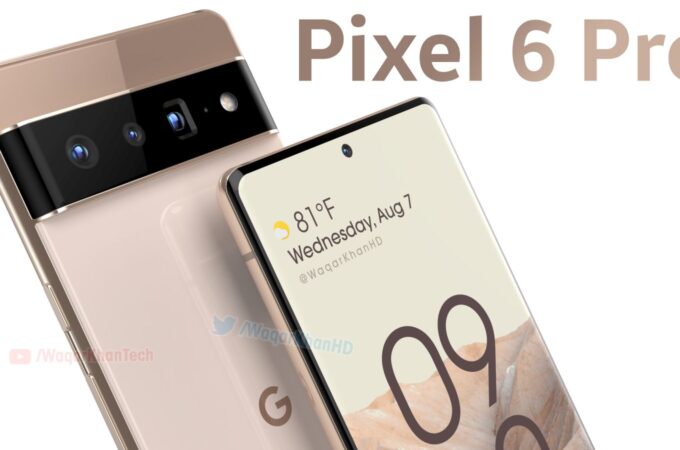 Hot on the heels of the mega leak revealing a periscope camera on the Google Pixel 6 Pro, we scored a set of renders for the device. They’re made by Waqar Khan and there’s even a detailed video of the smartphone. We also recap the specs of the future Google flagship and try to figure out what they’re playing at.

First of all, the device is weird aesthetically. One would see the horizontal camera module pushed all the way to the top, not one full centimeter lower. There’s also the different color of the device’s “eyebrow” area, meant to give the device some panache, style, pizas. That’s better served if the top area is vividly colored. Rumors talk about a 6.67 inch display here with an AMOLED panel with a punch hole selfie camera and gently curved sides. There’s a very small chin at the bottom.

Google Pixel 6 Pro is said to pack a Whitechapel CPU, a processor made by Google, who doesn’t want to spend big bucks on Qualcomms anymore. The periscope telephoto camera is definitely intriguing here and sources say we should expect a 5X optical zoom from it, or something close to that. The last time Google used a telephoto camera, it was on the Pixel 4 two years ago. There’s also talk of ditching the 12 MP ultrawide camera and also new Sony larger resolution sensors included.

Maybe even the 50 MP beast that’s coming to the Huawei P50, with a 1 inch size. Back to the design though, Google seems to be really stepping things up a notch, after not giving us a proper flagship last year. Some things are kept unchanged, like the Power button with color accent or the general look of the lower back. I actually dig the color choices proposed by the designer and the imersive screen. I would vote that the pressure sensitive sides be gone and focus more on some astronomy/starry night picture modes.

Improved face unlock and Bokeh also wouldn’t hurt. Google would also slap Apple in the face if somehow they ditch all ports and go wireless.