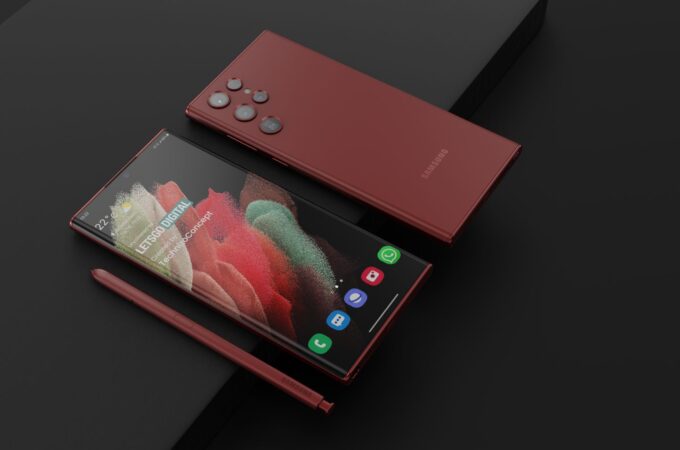 There’s been no shortage of Samsung Galaxy S22 Ultra leaks, renders and more and Letsgodigital and its partners, Concept Creator and Technizo Concept have generated most of them. Now they’re back, as the Galaxy S22 Ultra gets rendered with the third camera design in a row.

First it was the smaller “L” or “P” shaped module, then it was the separate module, split into two: 3 cameras in one piece and 2 cameras in the other. Now the latest back camera design involves… no camera island. Gone is the wraparound piece of the S21 series, replaced by tiny round enclosures for each camera lens. Even the periscope one is more discrete now.

This approach is by no means new, since it was used by Samsung on the Galaxy A32 many months ago and appelead to a few people. We also get to see the Galaxy S22 Ultra in a beautiful Burgundy Red and sporting a stylus next to it. Apparently, there’s a stylus slot here and in spite of that the device’s weight doesn’t increase, being pretty much the same as the S21 Ultra one.

There’s also a gently curved 6.8 inch screen here, so nothing truly changed on the facade, except maybe for the usual slimming of the bezels. In 2022 the punch hole for the 40 MP selfie camera is here to stay, since the under display camera is not ready for prime time yet, as the Z Fold 3 has confirmed already. The 200 MP camera sensor that Samsung unveiled this year is also not ready, since we’ll get a third gen 108 MP shooter at the back.

The most interesting big will end up being the Exynos 2200 CPU with AMD ray tracing GPU, but I’ve heard through sources that it draws a lot of power and also overheats.

About Kelvin
Passionate about design, especially smartphones, gadgets and tablets. Blogging on this site since 2008 and discovering prototypes and trends before bigshot companies sometimes
Casino Extreme Review by Joshua Mau   Six Myths About Apple You Are Likely to Hear