Samsung Rediscovers Pop Up Camera With a New Phone, Freshly Rendered by @OnLeaks 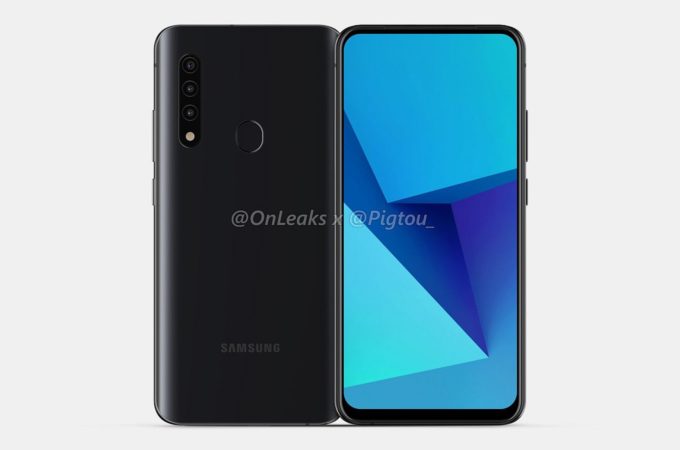 Just when I thought that pop up camera phones were going out of fashion, here comes Samsung with a new one. The device doesn’t have a name and it has just been leaked by @OnLeaks and Pigtou.com, based on a few CAD schematics from the factory. These are pretty credible renders, dissected below.

The general design format of the device seems to hint towards a Galaxy A, maybe a Galaxy M, but we can’t be certain. We see a triple back camera and a curved edge back panel. The front panel doesn’t have the bezels as narrow as you’d expect, especially since it gave up on the notch and punch hole. We also get to see the USB-C port and what seems to be an infrared emitter at the top, used to control a TV set and other gadgets.

Oddly enough there’s a fingerprint scanner at the back, not in the screen, a dead giveaway for a lower end device. We even learn the size of the device: 160.9 mm length, 77 mm width and a thickness of 9.2 mm, actually 9.7 mm with the protruding main camera. No specs here, but I expect a 4000 mAh battery at least, probably an Exynos 9611 CPU or something and 4 or 6 GB of RAM. The camera is a predictable 48 MP + 8 MP ultrawide + 2 MP Macro/Bokeh probably.

This could end up as a Galaxy A61s… but do we need pop up cameras anymore?

About Kelvin
Passionate about design, especially smartphones, gadgets and tablets. Blogging on this site since 2008 and discovering prototypes and trends before bigshot companies sometimes
Sony PlayStation 5 Gets Black Edition Courtesy of Letsgodigital and Designer Snoreyn   Samsung Galaxy Note 20 Leaked by Samsung Twice In One Week