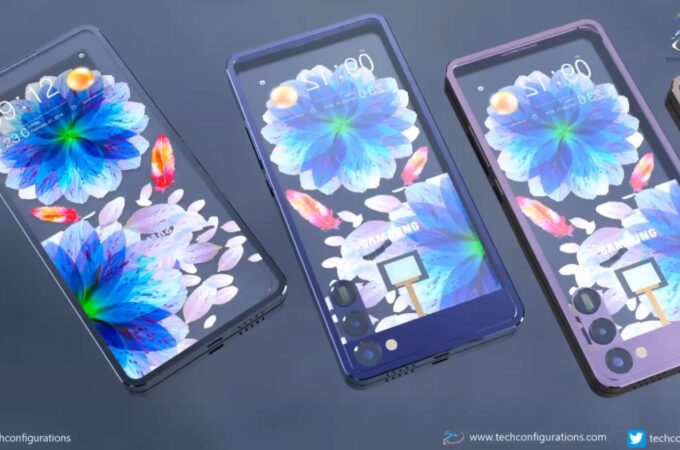 The idea of a transparent phone was trendy about 13 years ago, when the Nokia Morph stunned everyone. There’s been a few attempts and Sony Ericsson even made a transparent Xperia Pureness at some point. Also Xperia S if I remember correctly had a transparent section at the bottom. Now it’s Samsung’s turn to pop up with a transparent phone, albeit just a concept coming from Techconfigurations.

Let’s get this out of the way: we’re far from a commercial product like this. It’s likely that we’ll get a sort of Xiaomi Mi Mix Alpha with this trick applied to a part of the screen only. A fully transparent device is yeeeearrrsss away. One would suggest trickery and using cameras to show what’s behind the phone on a screen covering its entire surface. Well, that’s not exactly transparent…

An interesting aspect for this transparent Samsung phone is that it comes with solar charging, but that’s another problem. Small panels can’t gather enough energy to actually make use of it for powerful CPUs and the works. It also seems we’re getting a generous back camera with a 108 MP main shooter, 12 MP ultrawide and a periscope 12 MP camera. The transparent display reaches 1400 nits in brightness and the thing I love the most here is the metal frame that engulfs the slab of transparent glass.

You know what this remind me of? When I was small I had a toy with various slimey particles dripping away on glass tubes, like a sort of Oddworld hourglass. That’s exactly the vibe I’m getting here. It feels overkill, fragile, hard to produce, expensive, just of a gimmick, a wim. I’d skip it. Be sure to watch the video below to also learn the phone’s specs.

About Kelvin
Passionate about design, especially smartphones, gadgets and tablets. Blogging on this site since 2008 and discovering prototypes and trends before bigshot companies sometimes
Samsung Galaxy Watch 2.0 finally bridges the gap between fitness tracker and watch   RAID Arrays for Photography and Pro Video