TouchWiz 5 Gets Rendered, This is the UI of the Galaxy S5

Hasan Kaymak didn’t only render the Galaxy S5 concept here, but he also envisioned the way the UI on this device would look like. The result is the series of renders below, detailing a potential version of the TouchWiz 5. 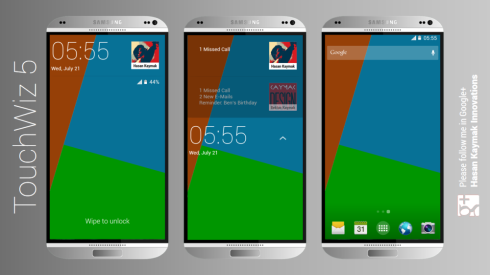 With all the talk about Samsung leaving Android behind for the sake of Tizen, it will be interesting to see how their UI evolves this year. First of all we seem to be getting a brand new background color pattern, one that feels a bit like the Nexus ones, only with darker shades. We’ve now got interactive notifications, shown in a new way and there’s no notification bar on the lockscreen.

The notifications can be seen under User Picture. The bulk of the app icons has stayed the same, while the S Voice seems to be a bit more evolved now, or at least its minimalistic interface made me think that. The change isn’t a radical shift from the old UI and I have to say I like that transparent row of toggles triggered together with the notifications, that are most likely transparent as well.

About Kelvin
Passionate about design, especially smartphones, gadgets and tablets. Blogging on this site since 2008 and discovering prototypes and trends before bigshot companies sometimes
Curved iPhone 6 With 5 Inch Display Gets Rendered by Lewi Hussey (Video)   Samsung Galaxy S5 2014 Render Created by Jermaine S