Google Nexus 5 Concept, Made by Sony

Google Nexus 5 is a concept to look out for, since the general impression was that the LG Nexus 4 was below everyone’s expectations. The previous Nexus handsets, those made by Samsun were very appreciated, but the LG one… well not so much. Now let’s give Sony a chance to make the Nexus 5, as seen by designer gpat, who sent us the concept. 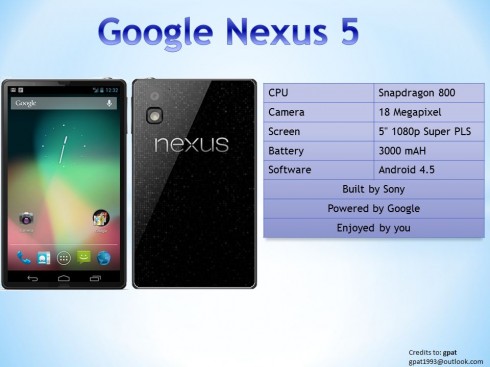 The Google Nexus 5 features a Snapdragon 800 processor, an 18 megapixel camera and a 5 inch 1080p Super PLS screen, plus a 3000 mAh battery. The device runs Android 4.5 for some reason, making me believe that this is supposed to be Android Key Lime Pie. The back side of the phone looks like a more compact LG Nexus 4 back, with the same interesting pattern. Fingers crossed for a back that’s not made of glass, since that was a disaster on the Nexus 4.

The front side of the phone seems to show us a very compact design and strange aspect ratio, if you look at the dock area at the bottom. It makes me think that the diagonal size is unusually small here, something like 4 inches or even 3.7 inches. Could a Sony Nexus phone be done like this?