Sony Ericsson W977 Walkman Phone Concept… Actually It Has a Front Side and Display!

Let me start by saying “My bad!”, as far as the Sony Ericsson W977 phone is concerned, since it seems it does have a front display, unlike what I was claiming in this article. It all became clear once Shane A. Bygrave published this great promotional shot of the Walkman concept phone. 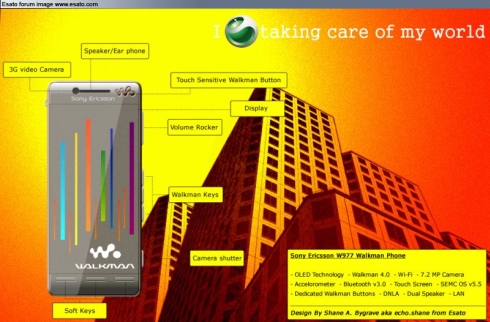 Sony Ericsson W977 is a Walkman handset featuring a front video camera, touch sensitive Walkman button, Walkman keys, a camera shutter and front keys below the screen. Moving on to the specs, we learn that the device’s touchscreen is based on OLED technology and the phone comes with WiFi, a 7.2 megapixel camera, an accelerometer, Bluetooth 3.0, dual speakers, DNLA, SEMC OS v5.5, and LAN.