Sony has been launching a variety of handsets over the past years, from varied segments of products. Those include midrange models, phablets, lower end devices and cameraphones. However, they seem to have forgotten about rugged phones. That’s why we enjoyed the concept of the Sony Xperia Active+ phone, designed by Sanjaya Kanishka. 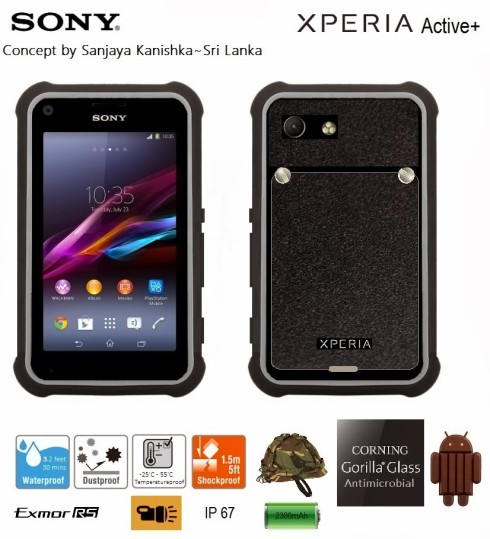 This rugged Sony phone is waterproof, being able to survive being dunked into 3.2 feet of water for 30 minutes and it’s also dustproof. The smartphone can function at minus 25 degrees Celsius and also at plus 55 degrees. Finally, it’s shock proof in the case of a 1.5 m drop and it has a special Gorilla Glass protection with antimicrobial layer.

Don’t get fooled by the picture above! This is a smaller handset, but with a larger rugged case. It’s a 4.5 inch device with a 480 x 854 pixel resolution and a Snapdragon S4 Plus 1.2 GHz dual core processor. It also has 1 GB of RAM, 8 GB of storage, a microSD card slot and an 8 megapixel Exmor RS camera with 3 LED flashes.

I’m guessing the flashes are rather implemented for a potent torchlight rather than the camera flash… What do you make of this resilient handset?

About Kelvin
Passionate about design, especially smartphones, gadgets and tablets. Blogging on this site since 2008 and discovering prototypes and trends before bigshot companies sometimes
iPhone 6 With OIS Camera Designed And Detailed in Fresh Clip (Video)   Unofficial 3D Concept Render of the Samsung Galaxy S5 Created by T3 (Video)