Yet Another Sony Xperia Nexus Phone, by Ben Ling

We’ve seen a bunch of Sony Xperia Nexus phones, all of them with elements in common and here’s another one, made by Ben Ling. This smartphone features a 5 inch Full HD TFT shatter proof display, that’s also scratch resistant. At the back of the Xperia Nexus there’s a 16 megapixel camera with LED flash and Exmor RS sensor. 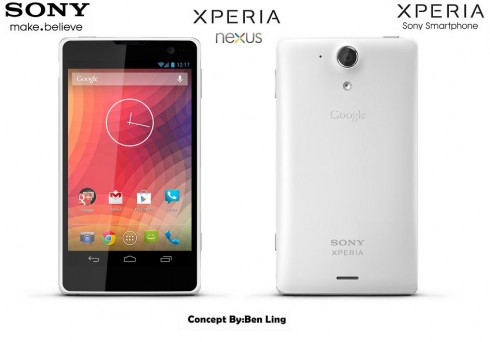 The 5 inch screen of the Sony smartphone supports a 1920 x 1080 pixel resolution and other specs include Sony White Magic technology, 16x digital zoom for the camera and Full HD video recording. Upfront we’ve got a 2 megapixel front camera with 1080p capture, while inside there’s a quad core 1.7 GHz Krait processor, the Snapdragon S4 Pro kind. Good news is that we have a replaceable battery and all of that in a package measuring 8.6 mm in thickness. The phone also has NFC, 2 GB of RAM, 4G LTE connectivity and runs Android 4.2 Jelly Bean.

This Sony Xperia concept also uses 32 GB of storage, Sony Mobile Bravia Engine 3 technology, xLOUD experience and a Li-Ion 3000 mAh battery. Bluetooth 4.0, microSD and 10 finger multitouch make the specs list complete. After LG, HTC and Samsung tried their hand at making Nexus phones, it could be Sony’s turn… or Motorola’s. Which one do you think it will be?