Sony has just announced the PlayStation 4, but they didn’t also unveil its hardware specs, price, or even a picture of the device, sadly. In order to get a consolation out of this, we show you a brand new concept of a PlayStation phone, or more accurately a PlayStation phablet done by Simon Drake. 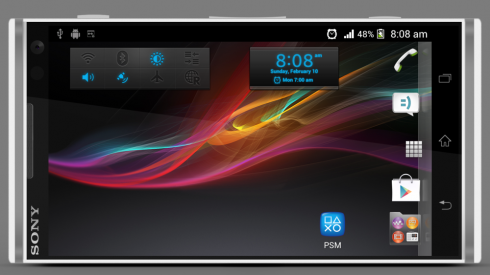 The device is called the Sony Xperia PS and it packs a Full HD 6 inch display, 2 GB of RAM and a 1.5 GHz quad core processor, as well as an Adreno 320 GPU. You can map the power button and camera button into the left and right button apparently and there are two illumination bars on board like on the Xperia S. The Sony Xperia PS packs a 13 megapixel camera with rounded LED flash and a 3 MP front camera, plsu a removable back cover and a very pretty design, with tiny bezels.

The CPU inside is a Snapdragon S4 quad core at 1.7 GHz and other specs include 32 GB of storage, a microSD card slot and Bluetooth 4.0. There’s also NFC, a removable 3000 mAh battery and the camera uses Exmor RS sensor, HDR and Full HD video recording. Frankly speaking, I can’t say I’m really excited by the PS4, but I’m quite happy with the idea of a PlayStation phablet. How about you?