Timblaer has imagined a new Sony concept with Windows Phone on board, accompanied by PlayStation/ Xbox services. This model brings a very interesting angular device, with a sort of a pyramid at the back. 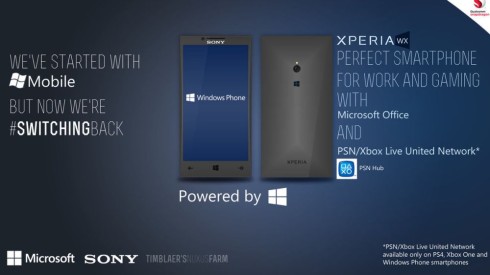 Originally, the Xperia series actually ran Windows Mobile, but ever since Windows Phone arrived Sony has been out of the game. There was a prototype at some point, but that never made it past eBay and such. This new model is called the Sony Xperia WX and it comes with Microsoft Office, PSN, Xbox Live United Network and compatibility with PS4 and Xbox One systems. There’s a camera at the back, probably on par with the 20 megapixel shooters of the latest Xperias.

We also get reasonably slim bezels, but the capacitive buttons below the display feel rather old. Windows Phone 8.1 brought support for on screen buttons, so that may need to be applied to a future flagship. I’d say this model is actually better looking than the current Xperias. I don’t know about PSN and Xbox Live on the same device, though…

About Kelvin
Passionate about design, especially smartphones, gadgets and tablets. Blogging on this site since 2008 and discovering prototypes and trends before bigshot companies sometimes
Samsung Galaxy S6 Imagined by Jermaine Smit: Here’s the New Design (Video)   BlackBerry Passport Rendered in White, Concept’s Nice but Too Wide