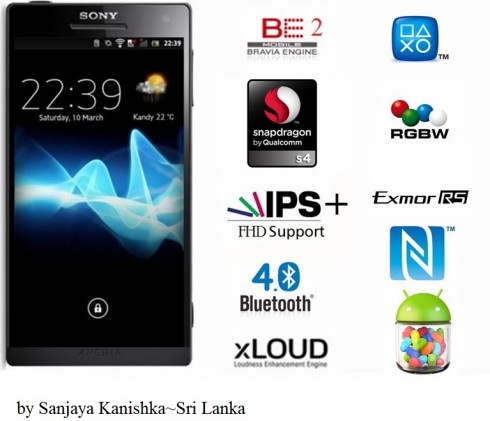 The 5 inch screen on board supports a 1920 x 1080 pixel resolution and has Gorilla Glass 2 protection. Under the hood of this Sony Xperia render there’s a quad core Krait CPU, a 1.7 GHz Qualcomm Snapdragon S4 Pro unit with Adreno 320 GPU. There’s also 2 GB of RAM, 32 GB of storage, a microSD card slot and at the back we’ve got a 13 megapixel camera with Exmor RS lens, 2160p capture at 30 fps and 1080p 60 fps HDR video recording, plus LED and Xenon flashes.

Sanjaya Kanishka also added a 2 megapixel front camera with 720p video recording, as well as LTE, HSUPA, EDGE and WiFi. There’s also Bluetooth 4.0, NFC, HDMI and Android 4.2 Jelly Bean as the OS. We’ve got a multi window option, just like on the Galaxy Note II, hopefully without a lawsuit. As far as battery goes, Yuga offers a 3200 mAh Li-Ion user removable battery. There’s even a price imagined for this model: $560, that’s actually pretty reasonable. Once again, this is only a concept, not a real device. It resembles the Xperia T a bit if you ask me…