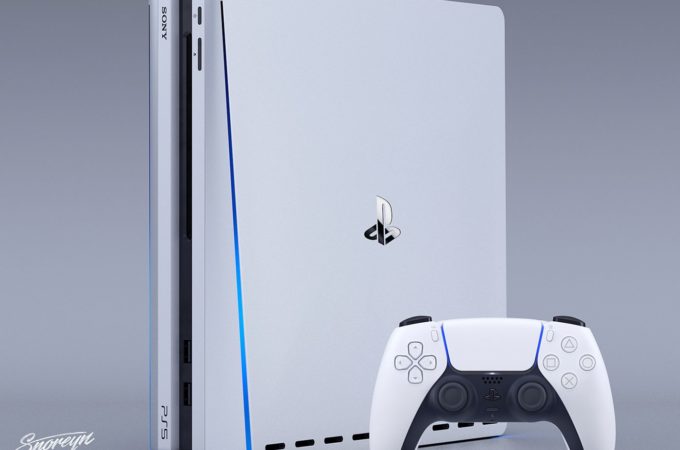 One of the biggest unveilings of the week was probably the one of the PlayStation 5 controller, aka the DualSense. It was unveiled by Sony itself and aims at changing the experience of the console. Inspired by its design, various render artists have started envisioning the console. One of them is Letsgodigital and their work is available below.

The design is a far cry from the spaceship-style approaches we’ve seen till now, inspired by various dev kits leaked online. Letsgodigital worked with designer Giuseppe Spinelli aka Snoreyn for this vision, which is a more traditional one. There’s a black and white version of the device and it’s quite beefy and multi layered. It’s got a luminous blue edge at the top side and the PlayStation logo is affixed to the console, plus a series of vents to keep the AMD components inside cool.

At the back we find multiple connectors, while the front provides access to the disk drive and also offers two USB ports. We’ve heard that Sony was planning on offering more USB ports on this new console compared to the older ones. The DualSense controller has the same layout of buttons as the DualShock 4, but it brings more haptic feedback for the triggers, moves the lit panel from the front to the sides of the touchpad and changes the angle of the trigger buttons.

The Share button is now a Create button and we also get an USB-C port for charging, better speaker and integrated microphones. Back to the PS5, I see the them of the blue light bar is quite present here, appearing especially on the white version, as a diagonal line on the top of the case, similar to the blue bars on the joystick. Designers should also think about functionality and a sturdier grille for cooling, since both the PS3 and PS4 were insect magnets, who crawled inside and fried components.

About Kelvin
Passionate about design, especially smartphones, gadgets and tablets. Blogging on this site since 2008 and discovering prototypes and trends before bigshot companies sometimes
Google Pixel Concept Finally Gets Rid of Notches, Channels Nokia N9   LG Teases Minimalist Concept Design for Next Flagship