Nexus 5 Gets Pictured in Official Shots for the First Time

I know we usually deal in renders and mockups, but a leak like this only comes once a year or so. We get to see the next Nexus Phone with weeks or maybe months in advance, courtesy of the leak below. 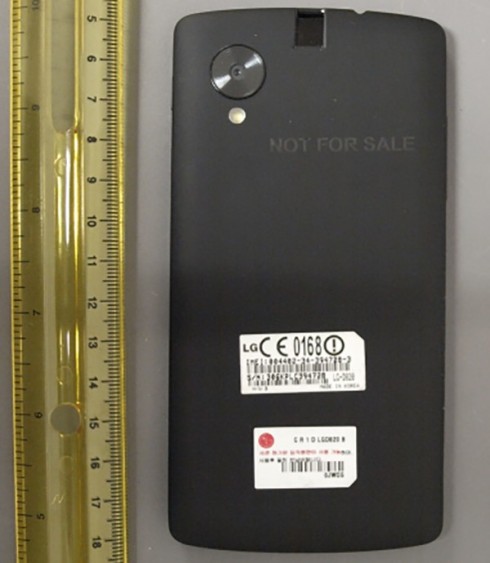 The LG Nexus 5 is, as you can figure out already made by LG, who is up for a repeat business after the Nexus 4. The pictures included in this article come straight from the FCC, so they’re as official as they get. Rumors are saying that the LG Nexus 5 is inspired by the LG G2 and it keeps the same camera with optical stabilization, plus it adopts a Snapdragon 800 CPU and 2 GB of RAM.

We get a 4.95 inch Full HD screen and that strange square at the back has me wondering… Could it be a fingerprint scanner? Some new feature? Maybe the infrared port? All I know is that the camera seems huge and this is good news for people dreaming of a good camera on a Nexus phone. Let’s face it, the cameras on the Galaxy Nexus, Nexus 4 and previous devices were not very good… By the way, this would be one of the few Nexus handsets with a removable back plate.

The back plate of the Nexus 5 seems to hold a wireless charging mechanism and NFC.  I have to confess I didn’t like the Nexus 4 one bit. Will the new model deliver?