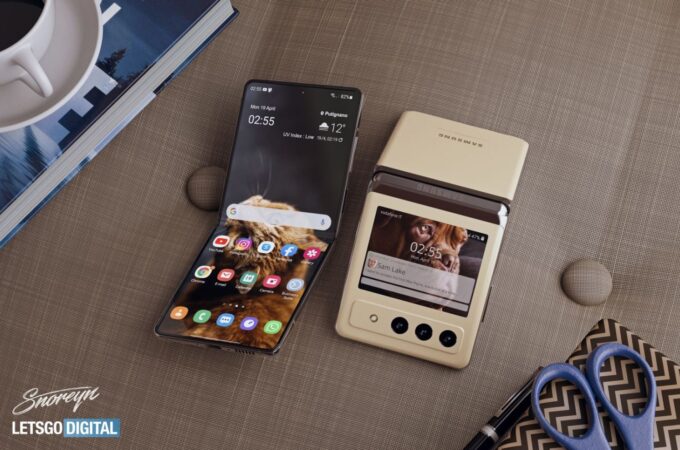 It’s been a long while since I last saw a clamshell foldable phone which really excited me. Finally, today we have one, the Samsung Galaxy Z Flip 3, a device that sports virtual buttons and the narrowest bezels I’ve seen on a foldable in recent history. The creation of designer Giuseppe Spinelli for LetsGoDigital, the device can be seen below.

Galaxy Z Flip 3 is rumored to debut in the summer of 2021, better said July, according to the latest leaks. If you’re wondering why the name is Z Flip 3 and not 2, it appears that the Z Flip 5G, which came in the second half of 2020 was actually the “2”. Back to the new design, Giuseppe Spinelli aka Snoreyn produced a wonderful piece of work here. The device is more subtle, more low key and elegant. It integrates the camera in a horizontal setup, which is unexpected, since a corner wrapped one a la Galaxy S21 makes more sense.

The key changes from the predecessors are the larger cover display and also the triple back camera. There are also changes for the hinge areas and reduced bezels. The Galaxy Z Flip 3 is also lacking physical buttons, which it replaces with tactile ones, also increasing the touch sensitive area around the buttons, making them easier to use. That applies to both the device in closed or open format. Also, recently we’ve learned that Samsung registered the name “Armor Frame”, alluding to a new and more resilient frame for its foldables, made of carbon fiber or titanium even.

Waterproofing should also be here and the external screen could end up with a 1.9 inch cover screen and a 6.8 inch main screen. Some say it’s actually a combo of 1.83 inch screen and 6.7 inch panel. No matter which one it is, it’s definitely a jump from the 1.1 inch of the current version’s external panel. A Snapdragon 888 CPU and the same punch hole selfie camera are also set in stone. A bigger battery would be nice, but with such a slim waistline, that’s almost impossible.

Be sure to check out the source below for more details.

About Kelvin
Passionate about design, especially smartphones, gadgets and tablets. Blogging on this site since 2008 and discovering prototypes and trends before bigshot companies sometimes
Apple HomeTV is Basically a HomePod With a Screen (Concept)   iPhone 13 Gets a New Trailer, Has Apple M1 CPU