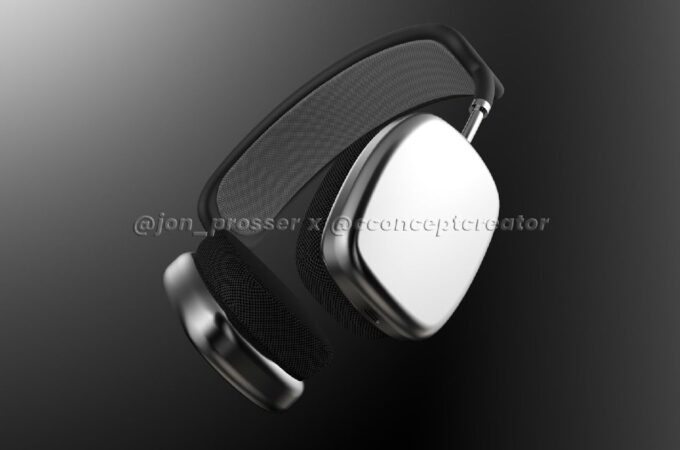 Usually when it’s a slow news day and there’s no new render out, we get to covering gaming consoles, tablets or even… cars. However today our good friend Concept Creator has rendered a product which has yet to be launched and it’s pretty hyped up one: Apple AirPods Studio. There are also leaks concerning it, which we cover below.

First of all, Apple has been rumored to bring the AirPods range into the large over ear headphone segment for a while now. They’ve got the whole Beats expertise to rely on. The first sighting of the AirPods Studio happened this week, via a hands on leak. The design is pretty elegant and kind of which you’d see Bose or Sennheiser deliver. Definitely more compact than Sony’s own WH-1000XM4. There’s also a rumored price tag of $349 and these headphones come with an industrial design, but there are multiple versions in development.

Interestingly enough, the Apple AirPods Studio seem to lack an audio jack, a 3.5 mm that is, which Apple seems to dislike. According to leak source Jon Prosser, the headphones will have “multiple advanced detection features”, which include neck detection. There’s a magnetic headband in the mix and detachable earcups too. ANC (Active Noise Cancellation) is also here and Apple is said to bundle a magnetic headband and earcups, too. Jon Prosser claims that the leak is legit and some say we may be seeing a Sport version of the headphones here, but we’ll also get a Classic one.

In spite of not having a 3.5 mm jack, we do get an USB-C port. Getting these headphones?

About Kelvin
Passionate about design, especially smartphones, gadgets and tablets. Blogging on this site since 2008 and discovering prototypes and trends before bigshot companies sometimes
Sony Ericsson Xperia Play 2 Unreleased Prototype Now Up for Sale   HP Gets Back Into Phones With a Foldable Clamshell Smartphone