Apple Has Created a Thin, Durable Hinge for the Flexible iPhone 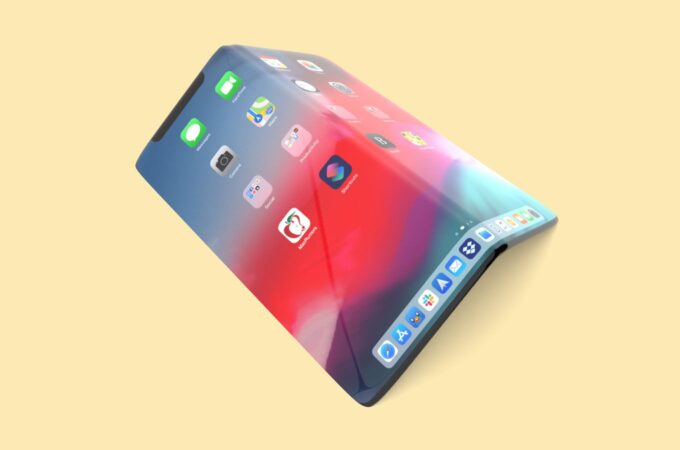 Forget about the Apple myths. The Cupertino-based tech giant has always been at the forefront of technological innovation, and today they have patented a newly designed hinge mechanism that could be used in future iPhone devices. They predict that this will also allow for more elasticity in their smartphones.

This new invention consists of three primary components; a fiber composite, hinges, and an insert material. This patent is part of Apple’s efforts to create their next-generation iPhone with the implementation of new technologies like flexible displays covering its entire surface area. If they can make it work, it would allow them to further distance themselves from Android devices.

The display would wrap around the sides and curve upwards to meet with the rest of the device, eliminating any bezels and buttons—a fully functional, completely seamless smartphone.

Apple’s current solution for a flexible display is not ideal; the displays themselves are typically made of glass, which is rigid (like most smartphones) but then delivered in the form of an extremely flexible sheet thanks to its plastic backing. To protect it, they cover it in an impermeable film and sandwich it between two layers of aluminum. The result is a “hump” on each device where they meet, and the speakers and microphone still have only so much flexibility before the damage becomes imminent.

The new patented design eliminates this by combining high-strength polymer lugs with an elastomeric insert material. Rather than housing all components internally like Apple devices normally do, they can now be placed externally on the lugs.

This allows for better stress distribution over the entire structure since it would no longer simply act as an adhesive between two components. The result is a much thinner design than what is currently available with increased durability and flexibility, all without increasing strain on any components.

Apple’s patent filings show that they are already well aware of other companies’ attempts to do this same thing, which should give them a big leg up in trying to create their first truly flexible iPhone. Whether or not they will actually be able to implement it into mainstream devices could still depend entirely upon whether or not LG Display succeeds with their own flexible OLED panels.

What we Know about the Foldable Phone Plans

The latest patent from Apple has been an interest to most people since they have tried to reduce the thickness of their devices by a significant margin. There’s a good reason why many consumers demand thinner and sleeker smartphones.

Apple has finally added support for a fully flexible screen that is just as durable as all of the current smartphone screens out there, but now it can be used on one device that is completely flat when it isn’t being used. The sheer number of different applications is what makes it so impressive, and this also opens up a lot of new opportunities for upcoming iPhones in the near future—if it ever gets released, at least. Here are the basics you may want to know about the foldable phone:

While Apple hasn’t made an official announcement about their plans for foldable iPhones yet, we know that this will be the first foldable phone they have ever made. This will be a major step for them, and it’s one that many other companies are still trying to accomplish right now.

There were rumors that Apple and LG would work together on a new flexible OLED display for use in future iPhones and this report suggested it might even be used as part of their first-ever foldable iPhone. The good news is that we know both companies are extremely interested in flexible OLED technology for smartphones right now, so there’s a very good chance they will eventually find a way to start working together (hopefully).

We don’t know what the actual price for this device will end up being either, but some estimates suggest that it could end up costing as much as $1,099 when it’s finally available to consumers. That is a huge amount for a smartphone, but there are also going to be plenty of people who want this device regardless of the high cost including students who may want to use it for assignment writing services using the device.

There has been talk about Apple releasing three different versions of their foldable phone, just like they do with their regular iPhone releases each year. The rumors suggest that one of the options will have a 7.8-inch display, which is larger than what we’ve seen from most Android phones so far but it’s also not as large as the 10-inch and 13-inch devices that were rumored to be in development at some point.

Apple may just release three versions of this device with 8, 9, and 11 inches worth of screen real estate if they do end up creating them for sale at some point. These would make sense based on their current iPhone lineup though there may be more ideas in store for those who want to purchase this incredible new product.

The new patent suggests that Apple has created a very durable hinge for this device, which means it should last you through months or even years of usage before you have to worry about replacing it. This is something that other folding phones haven’t been able to achieve so far.

We don’t know when it’s going to be released yet, but reports suggest that Apple may wait until 2023 to finally unveil this amazing new iPhone model. The sheer number of different apps and games available at launch makes us think they won’t release it until then, but we do hope these rumors are wrong and an announcement will happen before that time.

There are rumors that Apple is testing two designs of iPhone Flip: a fold-out hybrid tablet similar to the Samsung Galaxy Z Fold 2 and a clamshell flip phone design comparable to the Galaxy Z Flips. The good news is that, according to sources, Apple will be using a clamshell design; however, it is still in the early stages of development, and there’s always the chance things could change. Patents also show that Apple may be looking at several possibilities for its foldable gadget, including future phones that would abandon the clamshell design in favor of something else.

When it comes to the iPhone Flip, Apple is very much aware of the potential it offers. With a foldable display that allows for simultaneous multitasking and innovative new features, this phone will be an absolute game-changer for both Apple and its customers. We can’t wait to see what ideas are in store for us once it’s ready to hit stores!

Charles Normandin is a freelancer at AssignmentHolic service with an experience spanning three years in content creation, Charles have developed a reputation for writing unique and highly engaging texts. He speaks 3 languages at a high level and is fond of volunteering, drawing, and rock climbing. Meet him on Twitter @Charles60104524.

About Kelvin
Passionate about design, especially smartphones, gadgets and tablets. Blogging on this site since 2008 and discovering prototypes and trends before bigshot companies sometimes
Is It Possible To Recover Deleted Data From An iPhone   Learn numerous applications in our smartphones that we love using for various everyday tasks