Remember pins and badges? Everybody used to wear them, on punk rock vests and schoolbags… Well, why not have smart pins nowadays, that are used as more than just tech beacons? That’s pretty much what designer Adrian Berr proposes with the following Apple iWatch concept.

Although the name iWatch is pretty a trend of the past now, we can still dream of such units. Smaller than a regular watch and much more barebones, the device is going to be circular and basically the size of a coin. Yes, it can be used as a watch and it comes with a polyurethane or leather belt, if that’s the case. 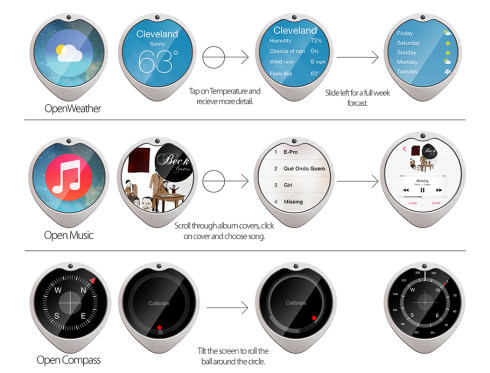 It’s based on a side-swiping UI and even has a music player. On board we find a 1.5 inch Retina Display, a 2 MP front camera and the Apple A7 CPU inside. The product has Bluetooth 4.0, a fingerprint sensor built in and a resolution of 1136 x 640 pixels. Apple iWatch weighs .09 ounces and has a depth of 0.6 inches. Would this even work?

About Kelvin
Passionate about design, especially smartphones, gadgets and tablets. Blogging on this site since 2008 and discovering prototypes and trends before bigshot companies sometimes
New Microsoft Surface Phone Concept is All About Continuum and Keyboards (Video)   MWC 2016: Samsung Galaxy S7 Versus LG G5; Which One Really Innovates?