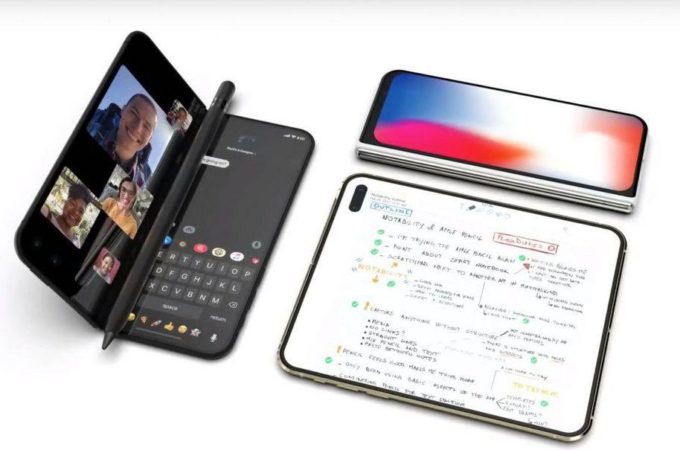 A foldable iPhone may happen in the future, once Apple settles on a format, but this feels like the type of experiment to happen once everybody has done it and some have failed. Apple is already known as an overpricer of devices and they may go one step further with an iPhone Fold. In the meantime designer Ben Geskin posted online an iPhone Fold with an 8 inch screen.

He mentions there’s an 8 inch ProMotion display as the inside screen and I see there’s also a screen on the outside. The format is pretty similar to the Galaxy Fold one, at least the hinge looks the same, but the external screen is much bigger (perhaps 5+ inches). I see that the internal foldable panel also gets something new: a wide cutout for the selfie cameras, in the vein of the Galaxy S10 5G. Other than that the Apple Pencil is a nice addition to the package, making the whole productivity thing feel wholesome.

Too bad we can’t see the back camera setup, but I’m wiling to bet it’s arranged like a square again and probably includes 3 or 4 sensors. The iPhone Fold also seems to provide a slightly different approach for the main screen. It’s able to fold at 30, 45 or 90 degrees and remain usable, as if it were a laptop for example or a Nokia N Series. Apple would probably also want to make the device a little less bulky, since it looks like a thickie right now. Stainless steel is probably the way to go for the hinge part, mixed with plastic and aluminum.

What’s weird is that we haven’t seen as many foldable phone patents from Apple compared to other companies out there.

About Kelvin
Passionate about design, especially smartphones, gadgets and tablets. Blogging on this site since 2008 and discovering prototypes and trends before bigshot companies sometimes
iPhone 12 Pro Max Gets Rid of Notch, Gets Wider, Bigger in Diagonal   Samsung Galaxy Fold Gets an External BlackBerry Style Keyboard