The tables have turned or better said the tablets have turned and people are starting to wonder what the next Microsoft Surface tablet killer will be, instead of the iPad killer. Well, for one thing, the iPad could be turned into sort of an ultrabook, like this concept here, that involves a magic mouse, a keyboard accessory and OS X on the New iPad. 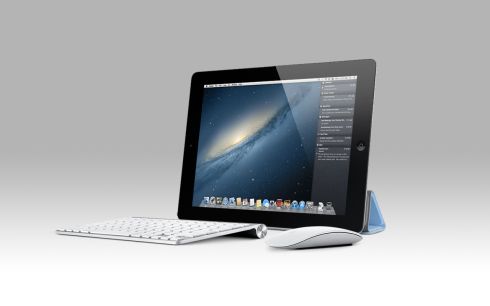 The idea comes from Zeki Ozek, who thinks that Apple will put OS X on the Retina Display iPad and use the Bluetooth Magic Mouse and keyboard in tandem with this unit. Add in the mix the fantastic resolution of the screen and maybe a future Apple A6 quad core CPU and you won’t ever need a MacBook, ultrabook, laptop or netbook. Still, the Surface Tablet has that classy keyboard with very well embedded keys and it’s hard for me to imagine an alternative from Apple just yet.

I’m curios if Apple will ever launch an iPad with detachable keyboard… I wonder why no accessory maker came up with an official detachable iPad keyboard, or at least I don’t know any company, that turns the Apple tablet into a laptop.