We’ve almost entered the month of August, which means we’re about 2 months away from the debut of the new generation of iPhones. The new model will most likely be called the iPhone 5S, but the iPhone 5 Plus is also not a bad name for it. Let’s see a render of the next gen Apple handset: 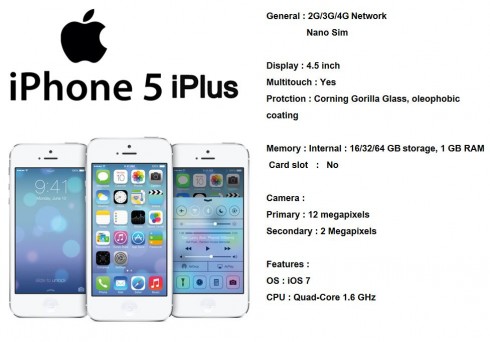 Created by Rixxan Z, this mockup involves a 4.5 inch display, a nano SIM card slot and obviously iOS 7.0. The device has Gorilla Glass protection with oleophobic coating. Internally, there’s 16/32/64 GB of storage, 1 GB of RAM and at the back we find a 12 megapixel camera. Upfront there’s a 2 MP shooter and the brain of the smartphone is a quad core 1.6 GHz processor.

I keep hearing about a fingerprint scanner on the iPhone 5S, so the iPhone 5 Plus mockup should involve one as well. An iPhone that’s 0.5 inches bigger than the one from last year will probably add the extra millimeters to its length rather than width, as shown by the render.