The iPhone 6 and iPad 5 are making their way to the media, but we should expect an iPhone 5S rather than the next generation of Apple handset. Frank_Snk imagined a totally futuristic next gen iPhone, one that incorporates a bunch of projectors, that will give you both the work interface and a virtual keyboard to play with. 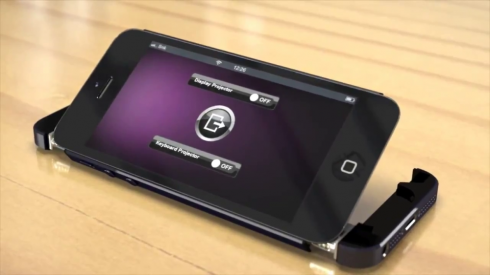 This iPhone 5S turns into a Mac, a full fledged Apple computer and gives you the entire unaltered OS X experience projected onto a wall in front of you. Then there’s also a full sized keyboard projected on the table in front of the user. How cool is that? The whole process is detailed in the video below and we also have some shots here. It appears that the top and bottom of the new iPhone will detach and reveal the projectors, integrated within a complex metallic structure.

Just so you know, this iPhone 5S concept is supposed to incorporate 4 pico projectors, so it probably has a kickass battery to fuel them up. Other than that the design is pretty much the same, except for maybe a CPU bump to handle all the high def imagery. I expect an iPad Retina level resolution or maybe even 4K from that projector…