iSurface Nexus: the Combination of Google, Apple and Microsoft Phone

Bob Freking teased an interesting device made through the cooperation of Microsoft, Apple and Google. Now we have the final version of the handset, called the iSurface Nexus, that’s pictured below. The designer combined the features of the operating systems, so we have live tiles on the home screen, a simplified dock on the same area and it all runs on an open source platform. 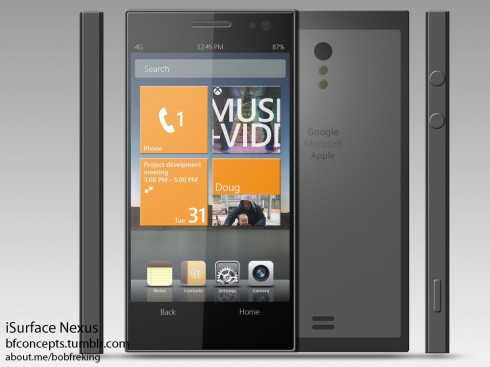 There’s Face Unlock available, deep social networking integration and live wallpapers too. Siri and Google Now work together and the hardware here includes a hybrid custom Apple A6 – Exynos quad core chip. At the back we have a 13 megapixel iSight camera and inside the iSurface Nexus there’s 2 GB of RAM, a Retina 4.5 inch Display and all the body is pure magnesium like the Microsoft Surface.

If you look at the phone from the side it looks like the iPhone a bit, while the top side looks like something that Samsung would make. The back also bears some influences from Android devices and this powerhouse looks truly appealing, although it’s a wet dream that will never come true. You know who’s lacking here? Nokia and frankly, the N9 design is still better than this hybrid, but that’s only my opinion. What do you think of this concept?