We have seen some lovely Nokia concept phones before, created by the same Jonas Daehnert and now here’s a fresh one. The Nokia Lumia 1001 is even more beautiful than the freshly launched Lumia 920 and 820 and it brings an air of elegance and finesse to the series. The new Lumias are bulky, massive and heavy, but this one seems slimmer. 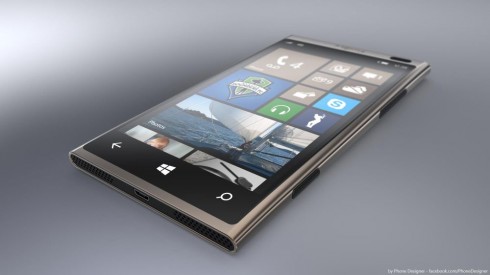 I particularly like the lower side of the handset, that somehow seems a bit Apple-inspired to me, if I think about the iPhone 5 renders I’ve seen lately, which is a good thing. Under the display that I dare to speculate is a 4.5 inch HD unit, we find 3 capacitive buttons and on the side we find the buttons with a changed look. Gone are those faux metal buttons and here are some faux rubber ones, if I may say so. I can’t seem to spot a camera button, while at the top there’s a mystery tray, that’s actually prety big, big enough to host both the SIM and microSD together.

This is a fantastic design and the choice of color, that brown-gray is interesting. IF you look closely you’ll see that the top part is a bit sloped downwards, which is also a nice touch. I seem to spot a tiny LED next to the audio jack, also a nifty addition. And the front camera is more discrete than ever. And now some speculated specs: 4G LTE, dual core or quad core Snapdragon S4 CPU, 32 GB of storage, 1 GB of RAM, 12 megapixel PureView camera and 1280 x 768 pixel resolution. Too bad we can’t see this baby’s back!