Nokia N1 has been one of the most searched phones on our website, that’s what statistics say. Why? Because it’s a Nokia phone with Android and there are many of you who want that. Sadly, Nokia doesn’t, but at least we have concepts like the Nokia Lumia Nexus shown below and rendered by Milanno Artworks. 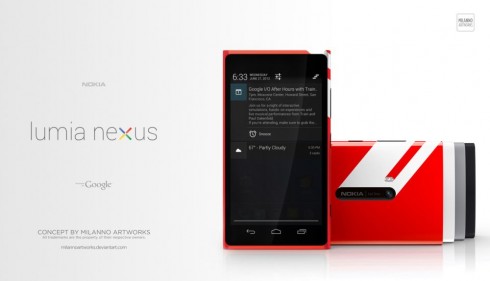 The designer behind this project says he’s a big fan of Nokia and was pretty disappointed by the fact that they chose Windows Phone over Android. He also quotes rumors saying that Google could allow more Nexus models, so that’s how the Nokia Nexus came up. This original Lumia mockup packs a 2 GHz quad core processor, a 5 inch HD display and 2 GB of RAM, as well as 32 GB of storage. Being so close to the phablet range, I imagine this is a huge phone, considering the 4.5 inch Lumia 920 is already a beast.

Imagine the beauty of the Lumia series, the Pureview camera, the unique elements of the Nexus, meaning faster updates to Android, the latest release on board and maybe some unique design traits as well: virtual buttons for example. This is and will remain only a dream, since Nokia seems ready to work only with Microsoft and never with Google’s Android. Which model do you prefer, the Nokia Lumia Nexus or the Nokia N1? For the potential future haters, I now the design is just like the Nokia N9, but it’s the whole idea of Nexus and Nokia that matters…