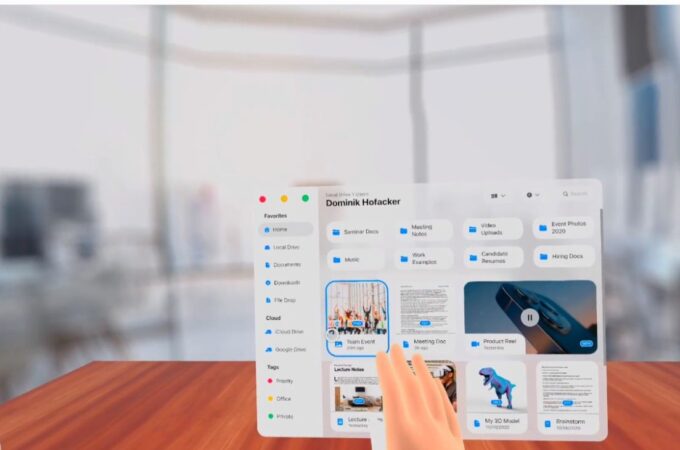 AR is starting to be a big deal for Apple, ever since the LiDAR sensors came up, but it’s about to get bigger. As we get closer to the Apple Glasses, we’re going to see more and more applications for it and some people even expect a new ArOS. Till then we get to see a concept of a macOS Augmented Reality version.

It’s dubbed macOS Reality and it’s a concept made by Dominik Hofacker. It gives us a glimpse into the future, one that involves interacting with an interface present all around us, with ample hand gestures. This is supposed to be a separate OS from the realityOS of the Apple Glasses. macOS Reality is focused on professional tasks and productivity features, which are similar to the current macOS ones. Your standard desk becomes a bit of a workstation, an interactive one, that includes multiple displays/desktops.

You can multitask with ease, check out emails, content, documents and more. The touch bar of the MacBooks can now be much larger, virtual and filled with useful shortcuts, also contextual ones. You can create smaller screens out of nothing, placing them as AR widgets around you. We also get an augmented reality keyboard, which will help you type faster. Well, let’s not get ahead of ourselves, since we can’t quite get the same tactility as a typical physical keyboard.

Apple could find a way to reproduce haptic feedback. Dominik is on to something and usually we get to see such interfaces in the form of laser projections. AR is the way to go. It does seem to be pretty intense for our human eyes and our peripheral vision though… It all started with the interface Tom Cruise in “Minority Report” and we’re still waiting on that.