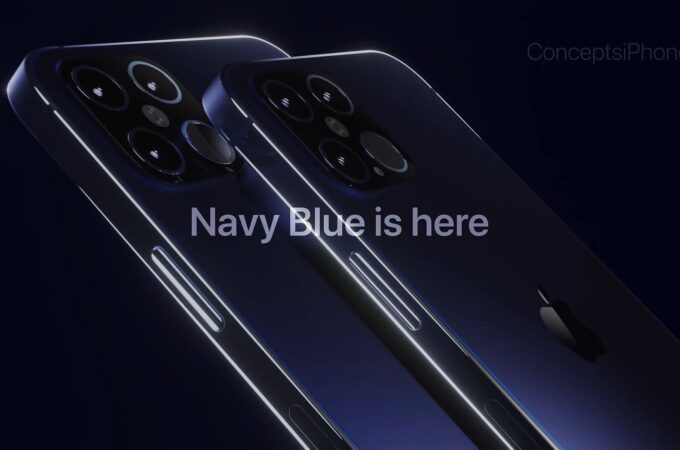 That’s exactly why the Mauro Battino (the designer) came up with with a new iPhone 12 Pro concept, that showcases the new hue. Navy Blue seems to be this year’s “Midnight Green” for the iPhone 12 series. The concept video published by ConceptsiPhone is very well done and has the dramatic music needed to get us in the mood. The camera module remains a square, but adds more sensors. The notch is a bit narrower and smaller and the metal frame goes back to the iPhone 4 approach.

The video mentions specs like a 120 Hz screen (XDR Super Retina Display), with a 10 bit panel. There’s a quad camera at the back, with 3 main sensors (wide, ultrawide and telephoto), plus a LiDAR scanner. Right in the middle of the cameras lays a LED flash and inside we find the Apple A14 CPU. Navy Blue seems to be a more elegant take on Apple’s frosted back from last year. It has the look of a schoolboy’s uniform and it’s a lighter color than the Midnight Green.

It’s also an elegant color to have, that used to be associated with Galaxy Note models. Galaxy Note 8 had a cool blue hue, if you remember, the Deepsea Blue and the Navy Blue isn’t far from it. It’s not my cup of tea and I totally want the iPhone 7 Plus Jet Black back.

About Kelvin
Passionate about design, especially smartphones, gadgets and tablets. Blogging on this site since 2008 and discovering prototypes and trends before bigshot companies sometimes
This Xbox is Inspired by the Tesla Cybertruck, because… why not!?   iPhone Slide Pro Brings Back the Sliding Second Screen; Do We Need It?