Vietnamese freelance designer Pham Tran Hai imagined how a BlackBerry with Windows Phone 8 and a luxury design would look like. He envisions a RIM phone with WP8 combined with the RIM platform. The design is created specifically for men and has a wooden back case or a golden one, depending on the client’s choice. 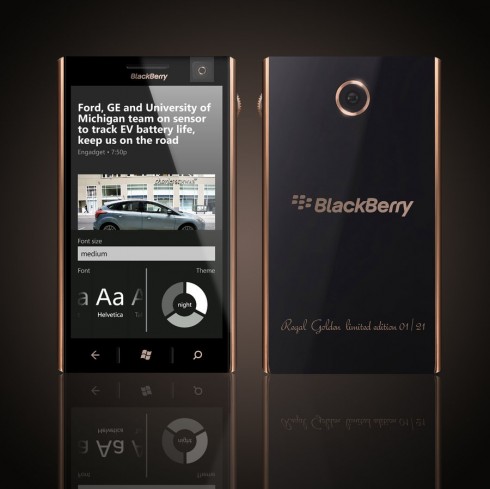 Golden sides are also included, for the total luxury experience. I guess that the price would also be high for this device called BlackBerry PlayPhone. Its specs are actually pretty impressive and they include a 4.3 inch HD AMOLED display, a 12 megapixel PureView camera (for some reason Nokia would lend its tech to RIM) and 32GB of storage. There’s also a 2000 mAh battery, the ability to do full HD video recording and a quad core processor under the hood, plus 1GB of RAM.

On the right side of the device we have a scroll mechanism instead of the volume up and down buttons. This scroll mechanism can also be used for page scrolling when doing Internet browsing or reading books, that’s a very cool idea. For once we can tell you what the designer used to create this piece of work: Photoshop CS5, Wacom Intuos 4. I can’t help but feel there’s a slight steampunk feeling to the device, thanks to that scroll wheel on the side and the inclusion of metal on the sides as well. Very nice job Pham Tran Hai!