Jonas Daehnert is responsible for creating some beautiful Nokia concepts, both handsets and tablets and now he’s back with something futuristic: a Nexus TV and Nexus Glasses from Google. He imagined a series of Nexus devices, that includes a TV set, a pair of glasses and a controller for the TV. The glasses feature two prisms and two cameras for real 3D Full HD recording. 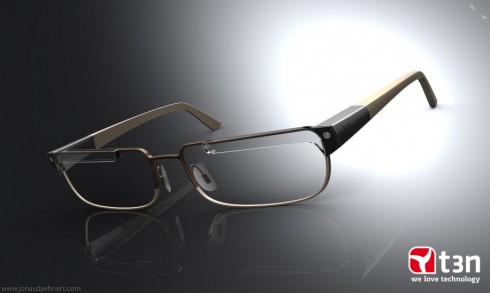 The glasses are controlled via cellphone, so you can save your recorded videos directly to your phone and use Bluetooth for that. Also included are shutter glasses for watching 3D videos. This Google Glasses render created by Jonas is inspired by the project that the search engine giant showcased a while ago. This concept uses prisms, cameras and a built in battery. The Nexus Glasses use 3D cameras for images and two prisms for augmented reality interface. Also shown by the designer is a full touch Nexus remote, that looks like a smartphone.

It’s optimized for TV interaction with menu control, web browsing and more. The remote is charged via induction, thanks to a special induction area located in the glass base of the TV. Finally, the Nexus TV is a 3D Full HD LED unit, that uses an aluminum housing and it features the normal specs of a modern TV. It also has two cameras, so 3D video chat is possible, also aided by the Nexus Glasses. The TV runs a custom version of Android, it has flash memory, multiple card slots, multiple HDMI connectors, cable ports, a VGA port, WiFi and a bunch more features. Would you buy this package?

[via T3n and Jonas Daehnert]