Sony Xperia Q is a 4 Inch Smartphone With 13 MP Camera, by Ben Ling

Ben Ling has shown us at least a dozen of Sony Xperia concepts and now he’s back with the Xperia Q, a phone that has a small display, by today’s standards, but also a pretty impressive camera sensor. We’re dealing with a handset that uses a 4 inch TFT HD display, that’s both shatter proof and scratch resistant. 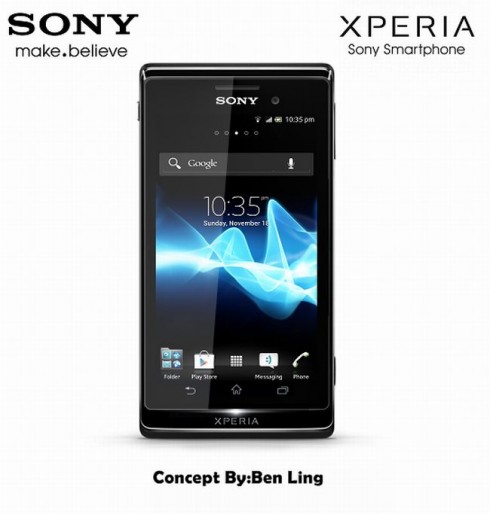 At the back of the new Xperia we find a 13 megapixel camera with LED flash, Exmor RS sensor, 16x digital zoom and Full HD video recording. The front camera is a 1.3 megapixel one, also with 1080p capture. Under the hood we’ve got the already classic dual core 1.4 GHz Krait processor, the Qualcomm MSM8260A Snapdragon S4 Pro, with Adreno 320 GPU. Xperia Q measures 8.2 mm in thickness, has NFC, weighs 115 grams and features 1 GB of RAM and LTE.

It runs Android 4.1 Jelly Bean, offers 16 GB of internal storage and its display supports Sony Mobile Bravia Engine 3 technology. Among the technologies available here we find Floating Touch, White Magic and xLOUD, all from Sony. Finally, under the hood there’s a microSD card slot and a Li-Ion 1750 mAh battery. As far as design goes, we’re dealing with what looks like plastic material, maybe polycarbonate and a small chin at the bottom, plus a bit of a sloped edge at the top.

The phone looks pretty narrow and I like the way the Android keys are integrated. I can’t figure out if they’re capacitive or virtual, although I tend to believe it’s the former.