We offered you a concept of the Galaxy Nexus 2 and a teaser for an upcoming Google Nexus phone. Now Bob Freking delivered the Google Nexus 2013, a really well designed piece of work and a very original idea behind it. This phone is all Google, so much that even its wireless network is offered by Google. The search engine giant is supposed to handle the software, hardware and network in this case. We have a gallery below and you can click on the pictures to see their larger versions. 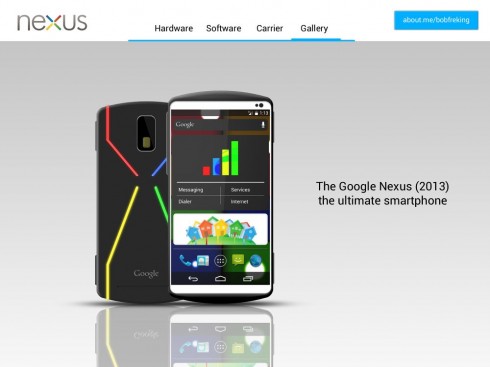 Bob Freking’s concept involves the announcement of Google Wireless, the company’s own carrier with cheap 4G plans. Also, know that the phones with support for this newfound carrier will lack bloatware and will be thinner, lacking a SIM card, that will actually be built in. Google Nexus 2013 features a 4.8 inch AMOLED display with a 1600 x 900 pixel resolution, a 1.6 GHz Nvidia Tegra 4 quad core processor and a 13.1 megapixel HD camera. The device is suppoed to be sold by Google for $299 unlocked and for $49 locked on Google Wireless.

This “Nexus 2” runs Android Key Lime Pie, with an updated version of Google Now and G Network, that offers free messaging and calls to other Android 4.2 phones. By the way Key Lime Pie is actually Android 4.2. The phone also integrates the Google Fiber service and as far as design goes, Nexus 2013 has some cool lines at the back, that light up depending on the notification you get. This lighting system is actually the famous logo of the Nexus family. Everything is covered with polycarbonate and Gorilla Glass and other specs include a 2 megapixel front camera and 3000 mAh battery. Beautiful and brilliant work Bob!