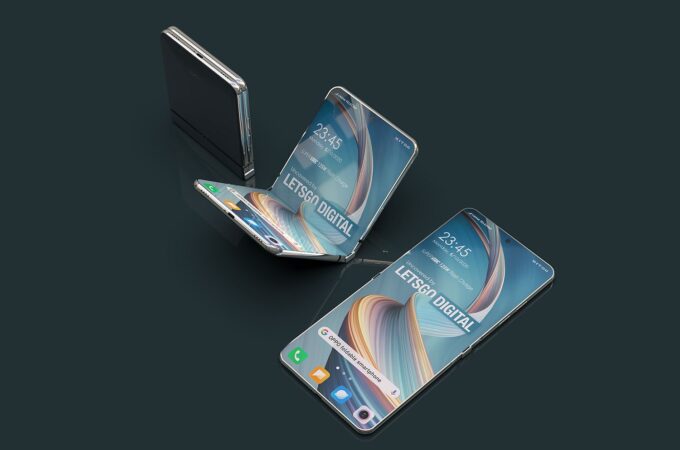 Letsgodigital is back on the case, snooping on patent and turning them into renders, as it happens below. This time they’ve uncovered a clamshell foldable phone made by Oppo, the Oppo Reno Flip 5G phone, of course only in the limbo of patents right now. It’s much better looking than both the Moto RAZR 5G and Galaxy Z Flip.

I honestly think we’ve seen the last of foldable flip phones in 2020 and for a long period for the next few years. It doesn’t seem like the best idea in the world and it’s a niche that not many are willing to compromise for. It’s got nostalgia going for it… and that’s pretty much it. Oppo does have the patent for an inwardly folding flexible display on a clamshell phone, with an ingenious hinge. Letsgodigital has rendered it as a device with zero bezels and with a very discrete fold down the middle, almost invisible.

Interestingly, while the Oppo Reno Flip 5G is a looker when opened up, when closed it’s rather… ugly. It feels incomplete, bland, too slim maybe? It’s like a makeup kit that didn’t make the cut. The patent mentions a rotating hinge with gears and a pair of cover plates that are rotatably coupled to the support plate and allow the housing to slide out relative to the cover plates. It compensates the difference between the length of the screen and housing during folds and unfolds.

It should increase the durability of the device. The hinge is also a bit wider than the phone itself and it offers 4 user positions here: at 30, 60, 90 and 120 degrees. Oppo seems committed to a really slim design, which makes me worry about battery life, particularly if we also get a high refresh rate and 5G. The lack of a crease is good news though…

The front camera seems integrated in a punch hole, which is the way to go nowadays.

About Kelvin
Passionate about design, especially smartphones, gadgets and tablets. Blogging on this site since 2008 and discovering prototypes and trends before bigshot companies sometimes
Huawei Mate X2 Gets Teased by Designer Concept Creator; 3D Renders Incoming!   Nokia N Series Is Back, With a 2020 Smartphone Concept