After having a look at Liam Quinn’s very first concept phone, we realized that the designer is something special and now we get to see another one of Liam’s works. Dubbed the “triPhone”, this concept was named like this because it comes with a triangular speaker and a flash arrangement with the same shape. It all started off as an iPhone concept… 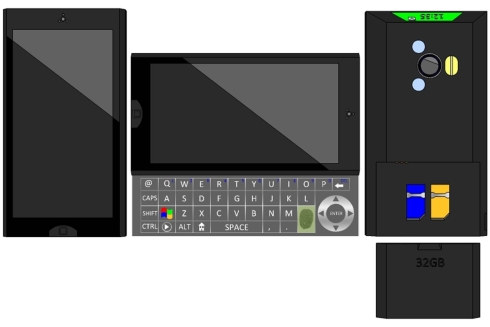 Liam claims that the new handset runs Windows Mobile 7 and comes with a multi touch interface, plus it features a 12.1 megapixel camera with dual LED or single Xenon flash.  A 2MP cam is also present on the front side and it’s used for video calling, as for the rest of the specs of this phone, triPhone comes with a 4 inch widescreen multi touch OLED display, with very good contrast.

The phone’s battery life is very good and on the back side of the device you’ll find an angled OLED display, used to alert the user when incoming messages or calls arrive. There’s also a full QWERTY keyboard with a fingerprint scanner and Windows Media player button on board and even a game pad, as you can see in the picture above.

triPhone comes in 8GB, 16GB and 32GB versions and its camera uses features like smile shot, anti shake, mosaic, frames, fun effects, touch focus and more. Liam Quinn images that this device is created by Apple or maybe Sony Ericsson (Cybershot?) and you might want to know that it doesn’t use any external hard buttons and it only includes one port, in order to keep it thin.

What do you think about Liam’s latest concept? I say that the designer’s skills are improving.