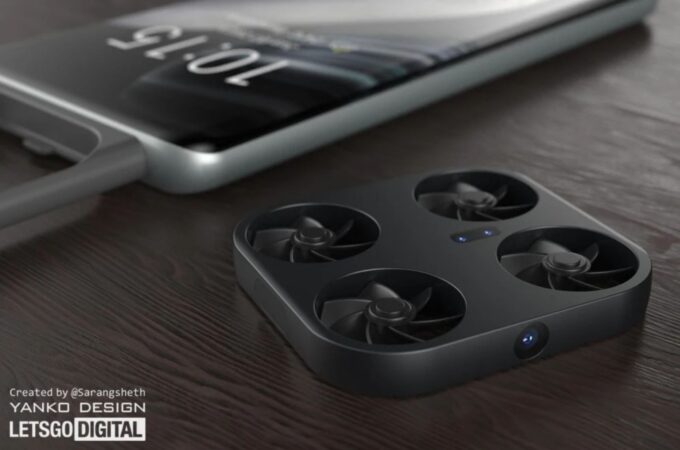 You probably saw that viral patent of a Vivo smartphone, one that integrates mini drones in its upper section. The patent listing was found by Letsgodigital at the World Intellectual Property Office and the paperwork was filed back in December and then published on July 1st 2021. Now we have detailed renders of its, shown below.

Designer Sarang Sheth, editor in chief at Yanko Design took over the project and created these beautiful images. This is basically a smartphone with a sliding top part, that hosts a mini drone, a square one with a camera embedded. The drone actually features at least two cameras, one at the front and one on the top. There’s also an optional third and fourth camera, which can be added. A downward facing camera is much more useful than the regular angle of the phone camera.

The drone is around 5 x 5 cm in size, otherwise it won’t be stored in the top of the phone. It’s also a very flat drone, considering the phone is obviously less than 1 cm thick. The flight distance is obviously limited, considering the design of the device and its miniatural size. I expect maximum 15 minutes of flying time, to be honest. Unless there’s some crazy solar charging of sorts.

This actually reminds me of the Nixie flying drone from back in 2014, that brought Intel a wearable design award, but never came to life. Amazon also has something similar, a Ring Always Home Camera flying camera/drone, priced at $249. Vivo is a bit of an expert now regarding gimbals, so we may expect to see one here as well. The problem I have with a drone inside a phone is that it would take precious space from the battery.