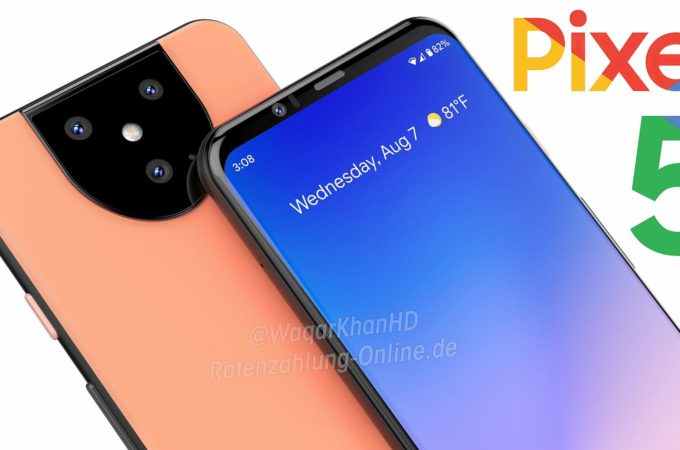 While the rest of the world is focused on the latest leak of the Google Pixel 4a, we’ve just come across a fresh render for the Pixel 5. Designer Waqar Khan even created a video of it, which you can watch below. The design takes on the latest traits from the leaks, including a pretty ugly camera.

Expected to drop in the Fall with Android 11, Google Pixel 5 is a smartphone that has a generic facade and the same hue of orange as the leather Oppo Find X2 Pro. Specs-wise, it gets a 5.9 inch OLED screen with Full HD+ resolution, plus a Snapdragon 765G CPU and 6 GB of RAM. Then there’s 128 GB of storage and a 3080 mAh battery. Expect incremental increases in hardware specs compared to the predecessor. While the display is advertised as having a narrow bezel, it’s still not as narrow as the competition’s.

Battery capacity should also increase. Camera-wise, we’re about to get a triple sensor setup, with a 12.2 main shooter, like the Pixel 4, but this time also with a zoom camera and an ultrawide lens. The Pixel 4 had the lack of ultrawide and larger battery as the main drawbacks and Google wants to avoid it. Once again, Google opts for a larger “forehead” to host the selfie camera, instead of a punch hole. Symmetry does seem to be here. I wonder where the fingerprint scanner went and if it’s embedded in the screen or simply ditched for a more secure face unlock.

As usual the computational part of the camera is going to be more impressive than the camera hardware. However, that sounded good back in the days of the Pixel 2 or 3, but now? Rivals have caught up with crazy NPUs. Google needs more than a bold design to get to users.

About Kelvin
Passionate about design, especially smartphones, gadgets and tablets. Blogging on this site since 2008 and discovering prototypes and trends before bigshot companies sometimes
LG Teases Minimalist Concept Design for Next Flagship   iPhone 12 Pro Has Under Display Camera, Dark Teal Hue