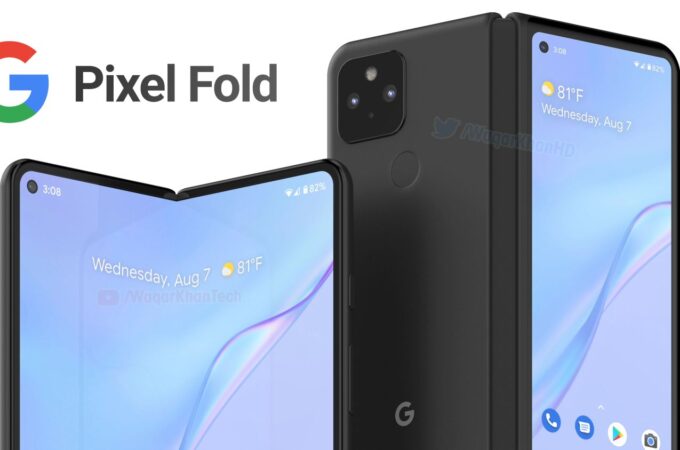 Google’s Pixel phones didn’t properly take off, particularly over the past few years, when innovation seemed to have stalled. Google is now rumored to get into foldables and with their production of the Pixels moved to Vietnam, they may feel freer to experiment and explore new avenues. One such avenue is a Foldable Google Pixel Phone.

Designer Waqar Khan took all the rumors he could find about such a device and created the Google Pixel Fold you see here. There aren’t many surprises, it’s all in the name. We’ve got a Google Pixel converted into a foldable phone. For example the camera design is pretty much the same with the Pixel 5 one. The format is also rather similar to the Galaxy Fold 2 5G, albeit with new colors, textures and a slightly beefier approach. There’s a left placed punch hole for the selfie camera and a plastic looking back, that somehow features a fingerprint scanner.

This device gives out vibes of a midrange foldable, something that has yet to happen. It also feels a tad more compact than the Galaxy Fold, Huawei Mate or even the Galaxy Z Fold 2. It is quite thick though and uses only two main camera sensors a the back, probably main and ultrawide (or telephoto). I’m trying to find a selling point here, but other than the price and the idea of a midrange foldable I can’t quite see one. I could only see a special tailored interface as one potential selling point, to be honest.

A new paradigm that converts your work and play into a multi window and multi split screen experience would be nice. A laptop mode would also be welcome. And that’s just the start…

About Kelvin
Passionate about design, especially smartphones, gadgets and tablets. Blogging on this site since 2008 and discovering prototypes and trends before bigshot companies sometimes
iPhone 13 Pro, AirTags and AirPower Get Brand New Concepts From Hasan Kaymak   Compal CHEESE is a Different Type of Foldable Phone, Meant for Photos and Videos