We previously wrote about the LG Nexus 2015 and its leaked renders and now it’s the time of its brethren to leak out. I’m talking about the Huawei Nexus 2015, that has also leaked through the same sources: uSwitch and @OnLeaks.

They have created renders based on the blueprints of the device that have been sent out to third party accessory makers ahead of the device’s release. We see quite a few elements in common with the LG Nexus 2015, like the dual front speakers, or the USB Type C port at the bottom, plus the fingerprint scanner at the back. Upfront we find a 5.7 inch screen and this model is supposed to measures 6.6 mm in its thinnest point and 8.5 mm in its thickest point.

The resolution is Quad HD and the dual tone color approach is not yet 100% confirmed. The back looks to me either like an iPhone or like one of Huawei’s modern handsets. Huawei Nexus 2015 is said to pack a Snapdragon 820 CPU, 4 GB of RAM and a metal chassis. I have to say that this handset could have been a bit sexier… 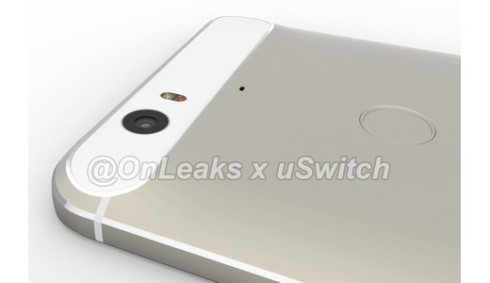 About Kelvin
Passionate about design, especially smartphones, gadgets and tablets. Blogging on this site since 2008 and discovering prototypes and trends before bigshot companies sometimes
Motorola Envision Mystery Device Teased, Feels a Bit Like an ASUS Padfone   iPhone 7 Rendered With Edge to Edge Design, 6.2 mm Thick Chassis