Google’s Project Ara has been evolving lately, with a video published on the web showing the hard work and dedication behind it. A variety of concepts related to the project has appeared including the one of designer Samuel Herb, who sees some gaming potential in this product. 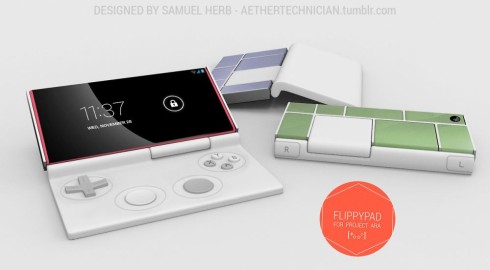 Thus he created a dual analog controller concept for the Project Ara, that would make it a very solid PS Vita and Nintendo DS rival. Typically, the device will get attachments like extra storage, better CPU, more RAM or a better camera sensor. However, bigger and purpose changing accessories are expected, such as this gaming “jacket”, if I can call it like this in the pure modu style.

We get a bunch of shoulder buttons, a D Pad, analog controls and action buttons. The product even has a cool name: Flippypad, a concept controller module for Project Ara phone. It can easily snap into the large back modules and allows for gaming on the go. It also serves as a screen protector while on the road. It could also boost up battery a bit.

And this is only the beginning of the modular handset’s gaming potential.

About Kelvin
Passionate about design, especially smartphones, gadgets and tablets. Blogging on this site since 2008 and discovering prototypes and trends before bigshot companies sometimes
Sony Xperia N1 Render Has a Slight Samsung and LG Vibe to it   LG Industrial Design Gets Fresh Concept; Cameraphone Included