Christmas is coming and with it a new render of the HTC One M9 will pop up, courtesy of Hasan Kaymak. He teased said device on Google+ and you can check out the teaser below. We’re dealing with an ultraslim phone that seems to slightly change the way metal is shaped to embrace the glass. 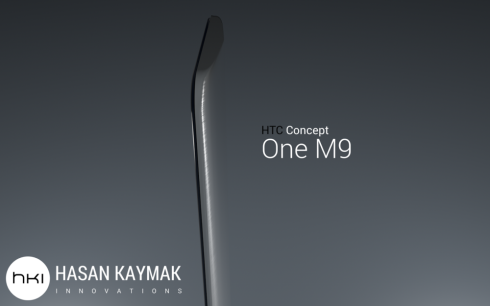 I notice a layer of glass overlapped on the phone, a but like the Lumia devices and we may even end up with curved glass at the front. Considering how popular and loved the HTC One Bloom 3 was, also made by Hasan, I expect big things for the HTC One M9 concept. The back side camera can’t exactly be spotted here, so the designer hasn’t decided what direction to go with imaging this time. I’d ditch the Duo camera and maybe go ahead and try some laser autofocusing or a brand new OIS system.

They’ve got to respond to Apple and Samsung’s innovations in the camera area, since I feel they can’t quite take on the Lumias. HTC M9 will probably bring a Snapdragon 805 or 810 processor, 3 GB of RAM and virtual Android buttons. BlinkFeed will evolve and come overlapped on Android 5.0 Lollipop. If you ask me what I want for the design of this model, well more color shades wouldn’t hurt and maybe get some gold and ruby in there as well, plus that kickass blue.

Would be nice if you could choose to buy the One M9 in plastic or metal from the start, with a lower price for plastic.

About Kelvin
Passionate about design, especially smartphones, gadgets and tablets. Blogging on this site since 2008 and discovering prototypes and trends before bigshot companies sometimes
Samsung Galaxy Note 5 Rendered by Rishi Ramesh, With 4K Display in the Mix   Samsung Galaxy S6 Re-redered by Jermaine Smit