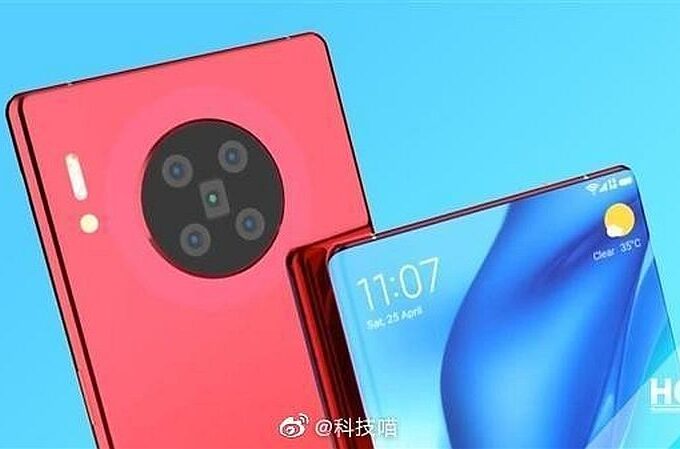 Huawei Mate 40 Pro will be a Fall flagship for Huawei, if everything goes well and the pandemic dies out. We didn’t get much info about it so far, but today we’ve scored a concept render for it. The device packs a Penta Camera at the back side.

Obviously it’s made of glass and meta and the camera graduates from a quad cam to a penta setup, with a new sensor in the middle of the circle of sensors at the back. The Mate 30 Pro had a waterfall screen, which has been replaced by an “overflow display”. There’s no punch hole, notch or cutout, so we’re either getting a pop up selfie shooter or a camera under the screen. I’m not sure that Huawei cracked that, with Oppo and Samsung also working on it and… failing so far.

There’s an USB-C port at the bottom and the earpiece is replaced with a vibrating display, like the P30 Pro and P40 Pro had. We should also get a Kirin 1000 processor inside, a 5 nm CPU made by TSMC, possibly one of the last, since Huawei is looking elsewhere for Kirins, like the company SMIC. That’s because USA is trying to lure TSMC away from Huawei. Camera-wise, we expect a periscope camera with 5x optical zoom, a new Sony sensor for the main camera, maybe a 50 MP shooter, an ultrawide Cine Camera with 40 MP resolution and probably a Macro and Depth cam.

Obviously there’s no Google services or Play Store. Not sure I see a selling point here, but I’m definitely not a big fan of the overflow display and I also didn’t like the waterfall screen. Hopefully there’s a solution that doesn’t involve crazy curves and no volume buttons.