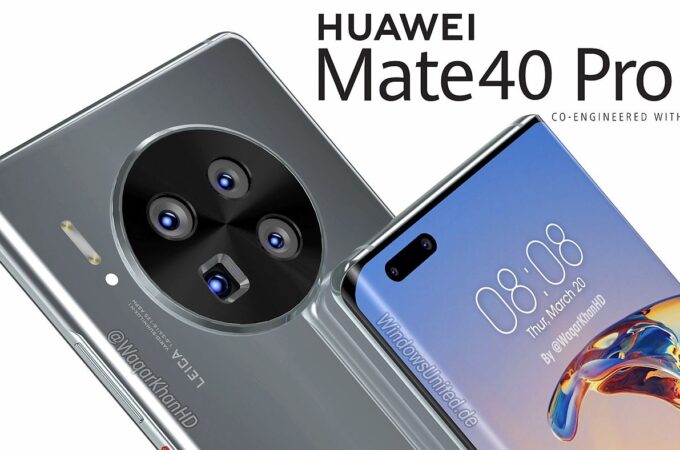 Huawei Mate 40 Pro is the next big Android flagship that 2020 has to offer. It’s also going to be the last, if I’m not mistaking. At the same time, it provides our last contact with the Kirin series, which Huawei is said to abandon on account of the Trump blockade of the TSMC partnership. So, I guess it’s time to see some new renders for it.

Created by Waqar Khan, these renders show the device in full detail in a variety of colors. Huawei Mate 40 Pro is going to be among the first Android smartphones with a 5 nm processor inside, the Kirin 1000/Kirin 1020. It’s also going to have the same ugly dual cutout for the selfie camera as the P40 Pro had, maybe a bit smaller this time. I see that the fingerprint scanner is still embedded in the screen and the waterfall display is here to stay. This may well be the first Huawei phone with a 108 megapixel camera, according to sources.

It keeps the big rounded camera module of the predecessor and also provides a periscope camera, this time with at least 5x optical zoom. Honestly there aren’t that many changes from the predecessor and one of them is definitely the return of physical volume buttons, which were capacitive on the previous model. Much like the Note 20 series, the color choice is a bit on the serious/business/sober side. We get black, dark green, gray, white and a sort of beige/bronze.

If you have the P40 Pro, it’s safe to say you’re not missing out on anything… maybe performance though? The phone is expected to be unveiled in September and start selling in October.

About Kelvin
Passionate about design, especially smartphones, gadgets and tablets. Blogging on this site since 2008 and discovering prototypes and trends before bigshot companies sometimes
Microsoft Surface Pro 8 Gets Detailed Renders From Concept Creator   Google Pixel 5 Renders Are Out With… Glitter on The Back!?