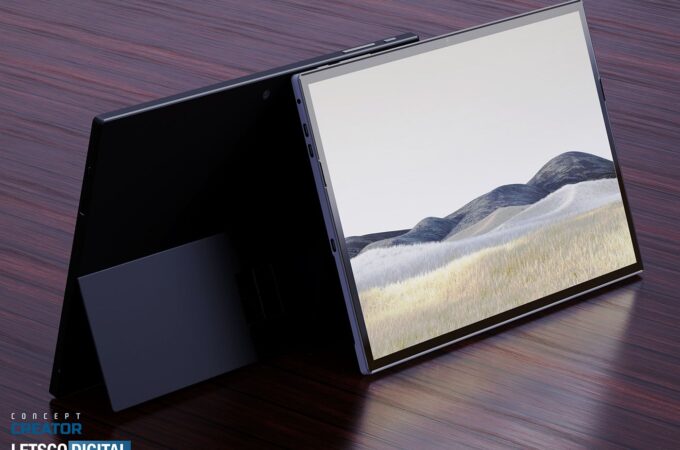 We usually cover concept phones, but every once in a while we make an exception for a special device. Microsoft Surface Pro 8 is said special tablet and it has been rendered by Concept Creator, in both 3D images and also a 3D video. The real Surface Pro 8 is probably coming in October.

We’re getting a 2 in 1 Windows tablet here, complete with a keyboard accessory. The device can be used with a digital Surface Pen and a keyboard. The device seems to be rather massive, probably keeps the magnesium alloy case and it’s probably going to be sport a new Intel CPU. We’ll probably also get an AMD version of it. Microsoft is going to reduce the bezels, which is a trend that’s often seen nowadays on electronics. One thing Microsoft MUST address is the battery life, which was not very good on the Surface Pro 7.

The battery life was almost 2 hours shorter than the predecessor. Microsoft Surface Pro 8 is imagined as a stylish laptop replacement thanks to Dutch designer Jermaine Smit, Concept Creator, in collaboration with LetsGoDigital. We still have a kickstand and we also get to see the Surface Arc Mouse, in a new version. The 12.3 inch touchscreen from the predecessor is probably here to stay. I expect a weight around 800 grams, like the Surface Pro 7 and a thickness around 8-9 mm.

Configs will include Intel Core i3, i5, i7 and from 128 GB to 1 TB of SSD storage. A 1.6W stereo speaker is also in the house with Dolby tech. I’m sure Microsoft will put a lot of emphasis on work from home and school from home, when promoting this product. The front camera may be upgraded, mics too and also the bundled software. Expect large emphasis on collaboration, Microsoft Teams, Skype and Office.

About Kelvin
Passionate about design, especially smartphones, gadgets and tablets. Blogging on this site since 2008 and discovering prototypes and trends before bigshot companies sometimes
Microsoft Surface Watch is Minimalistic and… Textile   Huawei Mate 40 Pro Gets Pictured in Full Detail in Introduction Video