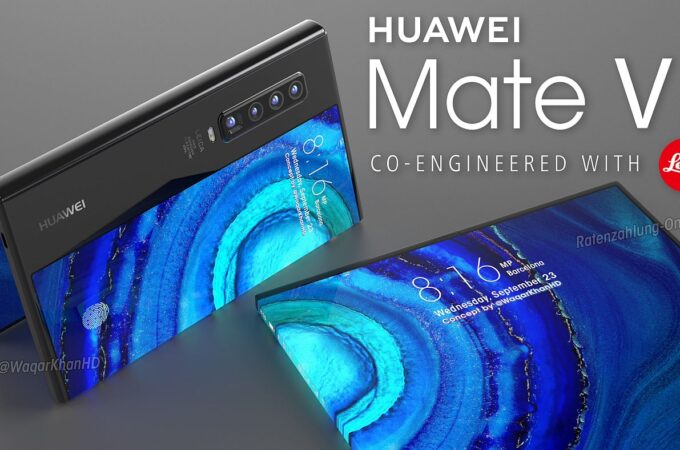 While the Samsung Galaxy Fold 2 has leaked a bunch of times and we’ve even heard rumors about a Galaxy Fold Z2, the Huawei Mate X2 remains very much a mystery. Recently we heard about Huawei’s patent for a so called Huawei Mate V, which may end up as another foldable. Taking that name into account, designer Waqar Khan converted his Mate X2 concept renders into something new…

Huawei Mate XS was more appreciated by reviewers and tech experts compared to the Galaxy Fold. The general opinion was that it’s a superior product, design-wise at least. It’ll be pretty hard for the successor to top it. Some people seem to dislike the idea of leaving all the screen space on the outside. It makes it prone to scratches. What’s definitely going to happen on the Mate V/ Mate X2 is a CPU bump to a 5 nm unit, probably a Kirin 1020 or Kirin 1000.

That will be problematic, since TSMC can’t supply Huawei with such chips starting from September. They may get a new partner in the meantime, or resort to MediaTek, that already has a few solid CPUs available and it’s prepping even more. Worst case scenario, it’s Kirin 990 5G again. Expect 12 GB of RAM inside and a quad camera on par with the Huawei P40 Pro at the back. Now since we’re all about design, let’s analyze that. So, it would appear that this time we get an inner screen and an outer display too.

The device seems more beefed up than the predecessor and it opens up like a book. There’s a big screen on the inside (probably an 8 incher) and a secondary screen next to the camera area (6.5 inch probably). The back side would be left without a screen panel. It kind of makes sense and compensates for Samsung’s rumored lack of an external screen on the next foldable (only replaced with a notification tiny screen). We also get a waterfall display on the left, with a screen edge that extends beyond the surface of the device.

When closed, in the “phone mode”, there’s a status bar for quick info about missed calls, emails and other notifications, on that side mini screen. I expect this device to pop up around October, like the Huawei Mate 40 Pro. Huawei should also offer us some sort of improved screen protection, like UTG. More multitasking features also wouldn’t hurt and maybe a stylus could be involved.

About Kelvin
Passionate about design, especially smartphones, gadgets and tablets. Blogging on this site since 2008 and discovering prototypes and trends before bigshot companies sometimes
Samsung Galaxy Note 21, Note 21 Ultra Already Rendered With Under Display Cameras   So What’s the Deal With Samsung Galaxy ZERO?