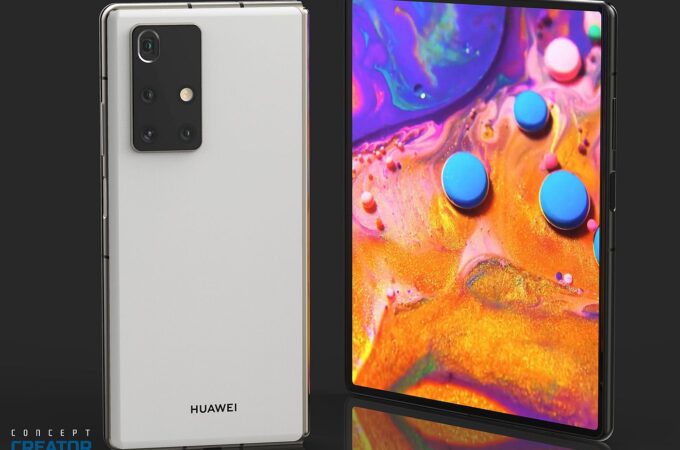 We started checking the Dutch website Letsgodigital daily now, since they’re posting renders like there’s no tomorrow. This time they came up with the next gen Huawei foldable phone, the Huawei Mate X2 5G, rendered with the aid of Concept Creator. It’s nothing unexpected, since it’s basically a clone of the Galaxy Z Fold 2 5G.

Huawei has been doing its own thing with the Mate X and Mate X, bout infolding devices without an “external screen” per se. They have the main screen, that leaves half on the front and half on the back when folded. I actually love the idea of pressing a button to detach part of the screen and it’s a pretty ingenious affair. It does leave the screens on the outside exposed to scratches, sans UTG and other types of protection layers. Now, judging by the patents and renders from Letsgodigital, they’re about to adopt Samsung’s approach.

That entails an outfolding device with an inner 8 inch folding screen and an external display. The latter hosts a dual cutout for a selfie camera, while the back side has a camera module similar to the Note 20 Ultra one. We also get a main screen without notches or cutouts, so that’s good news. If this device does make it, it should have a more discrete hinge, with bristles, plus a more resilient screen protection: plastic and UTG. The renders done by Jermaine Smit/Concept Creator are truly detailed and well done in 3D and I also spotted a side placed fingerprint scanner.

From what I can see there’s no longer a space between the two parts, like the Galaxy Fold and Z Fold 2 had. I also see that on paper the external screen diagonal is 4.5 inches, which is not realistic. 6.2 inches is more like it. Expect a camera setup similar to the Huawei P40 Pro+ apparently, a 120 Hz refresh rate on the main screen, stylus support and a sort of Flex Mode. Of course, a Kirin 9000 processor and 5G are pretty much a given now, as is the large price.

About Kelvin
Passionate about design, especially smartphones, gadgets and tablets. Blogging on this site since 2008 and discovering prototypes and trends before bigshot companies sometimes
Samsung Galaxy S21 5G Shockingly Gets Rendered Out of Nowhere, with Flat Display   Vivo Shows Detachable Pop Up Camera IFEA, Already has an Award For It