LG G4 Gets Skinny New Render, With 4 GB of RAM

The general opinion in 2014 is the LG G3 looks better than the Galaxy S5 and the Galaxy Note 4. Imagine how excited we are about the LG G4, that will obviously come next year, so in the meantime let’s feast our eyes on a concept for this model. 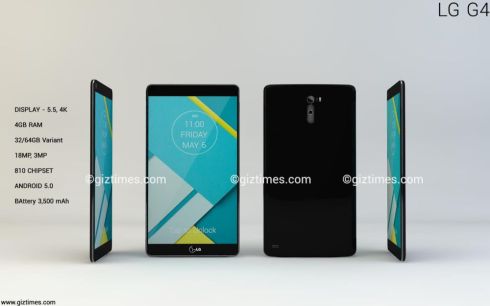 The LG G4 concept has been created by Giztimes.com and it’s a very skinny unit, that has a slight Nexus vibe to it. The smartphone has a very discrete and small camera area, while the physical buttons below the camera are now more subtle and elegant. LG G4 comes with a 5.5 inch 4K display, 4 GB of RAM and it will be offered in 32 or 64 GB versions. There’s an 18 megapixel back camera, a front 3 MP shooter and a Snapdragon 810 processor inside.

Android 5.0 Lollipop is the OS here, with a brand new UI from LG. There’s a 3500 mAh battery on board and all around the edges there’s a chromed area, or maybe the edges are made of metal following Samsung’s approach on the Note 4. I have to say this model is wider than expected, but after the narrower LG G3, it may be the proper approach. This model also features Dolby acoustics, front facing stereo speakers, wireless charging and a fingerprint scanner.