The LG Optimus G Pro is the upcoming flagship from LG, a phablet that’s coming at Mobile World Congress 2013 and it has some impressive specs. It was also leaked in a picture, but it was pretty blurry, so YugaTech created its own version of a render. Here’s the pic: 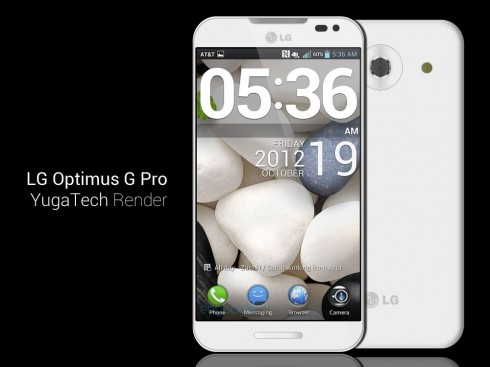 This model’s back reminds me of the HTC One X, while the front seems typical for a high end modern day smartphone with phablet design. The Home button is interesting to say the least, but I can’t figure out why they made it so wide. And now for the official specs: LG Optimus G Pro will feature a 5.5 inch 1920 x 1080 Full HD IPS LCD screen, with a super thin bezel, that will widen a bit at the top and the bottom for the Home button and front camera.

The handset packs a 1.7 GHz quad core Qualcomm Snapdragon S4 Pro processor, 2 GB of RAM, 32 GB of internal storage, a microSD card slot and LTE radio. At the back there’s a 13 megapixel rear camera and upfront we’ve got a 2 megapixel camera with HD filming abilities. There should also be a 3140 mAh battery and a strange new HDMI and RGB combined output.